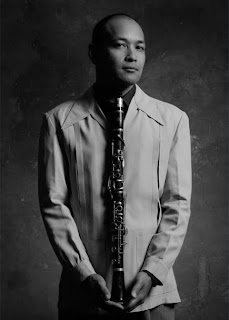 When: July 23, 2010 • Where: Orchestra Hall • Who: The Minnesota Orchestra conducted by Sarah Hicks, and a nine-piece jazz ensemble: Evan Christopher, clarinet; Irvin Mayfield, trumpet; Matthew Hanzelka, trombone; Gus Sandberg, saxophone; Erik Jacobsen, sousaphone; Don Vappie, guitar; Shannon Powell, drums; Andrew Gillespie, percussion; Dave Williamson, bass. Christopher, Mayfield, Vappie, and Powell are from New Orleans. Williamson is with the Minnesota Orchestra. Hanzelka, Sandberg, Jacobsen, and Gillespie are from New Orleans-style area bands, the Jack Brass Band and Mama Digdown’s Brass Band.
In May, New Orleans-based, Creole-style clarinetist Evan Christopher talked with writer Rick Mason about his commission for the Minnesota Orchestra. “I’m doing my best not to make it a ‘pops’ offering,” Christopher explained, “in the sense that a lot of times when you combine jazz and the orchestra, you get a texture that’s kind of banal, where the orchestra is just playing weird little background figures behind jazz.”

Many of us have heard that kind of music, the uneasy partnership between the jazzy band and the classical orchestra, the hybrid that never quite makes it out of the garage. But we didn’t hear it on Friday night at Orchestra Hall. Instead, we heard complex, moving, scene-setting music, and we were the first to hear it.


Treat It Gentle Suite, named for the title of Sidney Bechet’s autobiography, is a work in three parts, which Christopher calls “tableaus,” plus a prologue. The prologue, which begins with the orchestra, sounds like modern classical music, dark and suspenseful. Then Christopher’s clarinet makes a long, soaring entrance and it's like the sun coming out. I'm reminded of the opening to Gershwin’s “Rhapsody in Blue,” that grand clarinet statement. The jazz ensemble second-lines its way onto the stage, a visual reminder of where the music is from and what it will try to convey.

The first movement, “Remembering Song,” is lilting, spirited, and musically interesting. Not jazz in front and orchestra as backdrop, not a moment of jazz here and a bit of orchestra there, but woven together, with spaces for the improvisation without which jazz wouldn't be jazz. 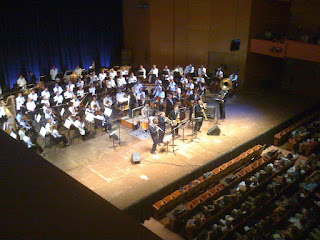 “Elegy,” the second movement, breaks my heart. It begins with Vappie’s guitar, all alone in the big hall, then Hicks brings in the strings, then Christopher enters with lovely, low clarinet, full of breath and feeling. It’s a magical moment. The rest of the brass comes in, and the orchestra, and if I were driving and hearing this on the radio I’d have to pull off the road. At the close, the clarinet weeps.

“King of Treme,” the third and final (for now) movement, is a showcase for the great New Orleans drummer Powell. Gillespie comes to stand beside Powell, playing furious tambourine, and for a while the music is all rhythm, no brass or strings or reeds. Irvin takes a fiery solo, Powell pounds out more beats on the tambourine, and the piece ends with horns, a farewell from the clarinet echoed by the strings—and a standing ovation.

Christopher is visibly relieved. Earlier during the performance, as I peered through my binox from my unofficial seat in the second tier, I saw his hand shake as he turned a page of his score.

“What an honor,” he tells the crowd. “I’m glad it’s over with." (Laughter.) "It’s no small victory for New Orleans music to be framed like this.” (Applause.) He tells us snippets of what went into Treat It Gentle Suite: the church bells he can hear from his house, waking up on Mardi Gras morning. “We’re just an abstraction,” he says [“we,’ I think, meaning the jazz ensemble]. “These stories became easier to tell when we had all these colors and textures [of the orchestra] to play with.” Indeed. Imagine writing a piano score, then hearing your themes and thoughts performed by violins and cellos, oboes and French horns, bassoons, even a harp.

But the night isn’t quite over. Concerned that Treat It Gentle Suite might be too short, Christopher has brought two more compositions to the stage: fantasies for strings based on works by Hoagy Carmichael ("New Orleans") and Sidney Bechet ("Petite Fleur"), arranged by Yohan Giaume, an orchestrator he has worked with in Europe. The string section (including the harp) stays, but the rest of the orchestra exits, as does half of the jazz ensemble, leaving Christopher, Powell, Vappie, and Williamson. The music is exquisite, lush and flowing, a good use of strings with jazz, not corny at all. In the final piece, “Petite Fleur,” Christopher comps Vappie while Vappie solos on guitar. His own solos are full of passion and intelligence. He stomps his foot—one two three FOUR. There’s no encore.

Backstory: Christopher has long been involved with the Seahawk Modern Jazz Orchestra, a group in Idyllwild, California (where he went to school) led by one of his former teachers, bassist Marshall Hawkins. He’s been writing music for their annual chamber orchestra concerts. During an interview in late 2009, he said, “I’m gradually getting more into the idea that there’s vocabulary in new Orleans music that can be used in those forums that I don’t think anybody’s done yet.” Back then, he was picturing Treat It Gentle Suite as five or six short movements, like dances, with each movement “symbolic of a certain aspect of New Orleans tradition.” It ended up as three movements largely because of time constraints; he spends much of his time performing in Europe, and his travel schedule is grueling.

Last week he said he had originally conceived of Treat It Gentle Suite ten years ago, when he was performing annual concerts for the Sidney Bechet Society. So it’s been on his mind for quite some time. He drew themes and ideas from two of his recordings, Delta Bound (Arbors, 2007) and Remembering Song (Arbors, 2010). Christopher told writer Larry Blumenfeld that “essentially, Delta Bound was about leaving New Orleans but staying tied to the city through the music even though I wasn’t sure I’d ever live there again [post-Katrina]. [Remembering Song] is about being back.”

At three movements, Treat It Gentle Suite isn't quite finished in Christopher's mind. He thinks it needs a fourth movement. Perhaps we'll hear it again someday. I'd like that very much. I'd also like Christopher to lead me through it, to act as a tour guide, if such a thing is possible. He's purposeful, perfectionistic, scholarly, so there's sure to be a story behind every musical gesture, a reason for every phrase. Something like This is where I was thinking of Sidney Bechet or Baby Dodds... This is Super Tuesday, when all the Mardi Gras Indians gather on the Bayou St. John... This is the sound of the sixth ward, and this is the sound of the ninth... This is a sazerac cocktail.

Photograph of Evan Christopher by Jim McGuire.
Posted by Pamela Espeland at 6:23 PM