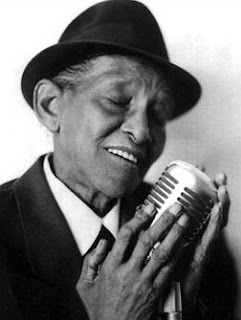 Jimmy Scott broke my heart last night, as he has every time I’ve seen him perform. His voice is so distinctive, his style so unique, his story so compelling that unless you’re made of stone, you will be touched by this remarkable artist. Never robust, he’s very frail at 80. He walks with great care onto the stage. The members of his trio are vigilant and respectful. Pianist Aaron Graves rises to lend a hand and turn a page of the papers (we suspect it’s the lyric sheets) on the music stand in front of Scott; bassist and music director Hilliard (Hill) Greene reminds him once of what song comes next. Scott doesn’t banter with the audience much. But when he opens his mouth to sing, he is transformed and so are we.

Scott and the Jazz Expressions trio—Graves, Greene, and drummer Dwayne Broadnax—are in Minneapolis for a two-day engagement at the Dakota on Monday and Tuesday, October 10–11. The second set on Monday began with an instrumental by the trio, and then Scott came slowly through the curtain. Many members of the audience rose to their feet to greet him.

His first song was “[Take] All of Me” by Gerald Marks and Seymour Simons. We think of it is an old song, a classic, because it is; Frank Sinatra recorded it four times. When it first became a hit in 1931, Jimmy Scott was six years old, a small boy in Cleveland listening to Paul Robeson on the radio. This was followed by “I Got It Bad,” “How Deep Is the Ocean,” and “It Had to Be You.”

Many people have commented that Scott’s voice isn’t what it used to be. In performance, that doesn’t seem to matter. He’s never really been about hitting notes with surgical precision, and he has his own sense of timing. He can still move from a big note to a whisper, and he hasn’t lost an ounce of his ability to communicate sheer, searing emotion. He proved that several times during the set, especially when, following a musical interlude, he came back on stage and belted out “Sometimes,” the first word to “Sometimes I Feel Like a Motherless Child.” For that tour-de-force performance, during which I’m guessing that every mother in the audience wanted to rush the stage and rescue him forever (I know I did), he received a standing ovation. He ended with “I Cried for You (Now It’s Your Turn to Cry Over Me).”

At some point early in the show, after the first song or the second, Scott said, “There’s no business like show business.” It’s evident that after all these decades, he loves to perform. He seemed to grow stronger—his voice, even his posture—as the set progressed. He drew energy from the audience, then turned around and gave it right back to us.

Blues giant B.B. King is also 80; he’s just released a new CD of duets (called “80”) with the likes of Eric Clapton, Van Morrison, John Mayer, and Elton John. King still sounds like he could punch your teeth out. Scott is doing some collaborating of his own. On Saturday, October 13, he’s scheduled to make a special guest appearance with recent Mercury Music Prize winners Antony and the Johnsons  at Carnegie Hall. Antony performed at the Woman’s Club in Minneapolis last Thursday, October 6; he is (as Rolling Stone described him) “a ghost-white giant with a voice of singular majesty.” Jimmy Scott is a wisp of a man with a voice of sheer will, spirituality, and passion. I envy those New Yorkers who will see them together. What a show that will be.