The Tierney Sutton Band: "On the Other Side" CD Review 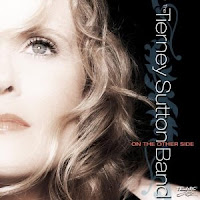 I’ve wanted to hear Tierney Sutton’s new CD, On the Other Side, since September of last year, when she previewed several selections at the Monterey Jazz Festival. Playing the late set on the Bill Berry Stage at the Night Club, she and her band turned songs I thought I knew (including a few old saws) into songs I sat up and listened to hard because it seemed I’d never heard them before.