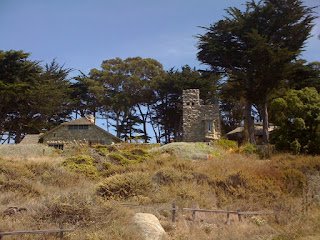 It's the first day of the Monterey Jazz Festival but the gates don't open until 6 p.m. so we have time for a few more sights. Early last week I read an article about Tor House in the Los Angeles Times and made a reservation for an 11:00 tour.

Tor House was poet Robinson Jeffers' home in Carmel (not Big Sur, as the article says). He built much of it with his own hands, using boulders gathered from the shore of Carmel Bay. I don't know much about Jeffers' poetry; his best-known poem is probably "Shine, Perishing Republic," and you can read it here. His work is thick, dark, often pessimistic and misanthropic, and when you stand in the low-ceilinged living room of his home, looking out at the ocean and Point Lobos, you wonder how anyone could be so negative with so much glory before him.

If you visit the website and look at the photos, you get the impression that Tor House is grandly situated all by itself on an isolated stretch of the California coastline. In fact, it's in a crowded neighborhood surrounded by multimillion-dollar beachfront homes (you enter from Ocean View Ave., but Scenic Drive is just on the other side). What was once a pristine view of Point Lobos has been scarred for the past 50 years by the so-called Butterfly House, which went on the market in 2007 for $19.995 million and apparently sold; it's currently undergoing renovation. Jeffers died in 1962 and watching that house go up must have made him crazy.

Tor House tours are limited to six people; as it turns out, we have the excellent docent, Sherry Shollenbarger, all to ourselves. We take our time hearing stories and poems, looking at photographs, asking questions, and just being in the rooms where Jeffers lived with his wife and muse, Una, and their twin boys.

Tor House was a lifelong project for Jeffers. He wrote in the mornings from his upstairs office, worked on the house in the afternoons. (Sherry tells us that when Jeffers wrote, he paced; when the pacing stopped, Una banged on the ceiling from below, where she was seated at her own small desk, to get him on track again.) The original house was begun in 1918 and built by a contractor; Jefferson apprenticed himself to the contractor, learned to build with stone, and added to the home over several years: a tower for Una, a dining room, a new wing. They had no central heating and used kerosene lamps; a tin tile (embossed with a lion) set into the wood ceiling above Una's piano was protection against rising heat and soot.

Tor House is managed by a nonprofit foundation affiliated with the National Trust for Historic Preservation. There are no buses, no T-shirts or key rings or snow globes; the only souvenirs you can purchase are books by and about Jeffers and simple notecards. Freebies include the foundation's newsletter and a teacher's guide to Jeffers' poetry published by the National Endowment for the Arts, also available online.

The house is filled with the personal belongings of Jeffers and his wife; their desks and chairs, shelves full of their books, quilted bench covers made from their old clothing (woolens ordered from the British Isles), the Celtic crosses Una loved, the unicorns people gave her. Carved into walls and lintels and doors are words and phrases they found inspiring. On the day Thomas Hardy died in 1928, Jeffers carved "Hardy" into a stone beside a door in the dining room. Seeing those shallow, uneven letters in the stone was a powerful experience. I could imagine the poet standing there, grieving and marking the stone.

We walk the garden, far more manicured now, Sherry tells us, than when the Jefferses lived there, and see the giant rock that became the cornerstone of the house (and is remembered in Jeffers' poem titled, you guessed it, "To the Rock That Will Be a Cornerstone of the House").

We climb the narrow, steep, uneven stone steps into Una's tower and look out over the ocean. (There's a second way up, an even narrower stairwell Jeffers created for his young sons. HH takes that one but it's way too claustrophobic for me. I can picture myself stuck and screaming.) Intrepid HH also climbs to the very top of the tower, even steeper steps with a chain handrail (in the Jefferses' time, we learn, they held onto a length of hemp).

You can read Jeffers' poem about his house here. Not thick, dark, or pessimistic, only slightly misanthropic ("fire and the axe are devils"), but tender, inviting, loving. Sherry read this poem aloud to us in the living room. What a pleasure.

If you enjoy visiting writers' homes, seeing where they worked and getting a feel for the environment that fed their creativity, Tor House is a worthy stop.

From there, after driving up and down Scenic Drive and marveling at the houses, we go to the nearby Carmel Mission, home of the Carmel Mission Basilica and the shrine of Father Junipero Serra (1713-1784), the Majorca-born founder of the mission chain that stretched across upper California in an attempt to solidify Spain's hold on the land. Here you enter and exit through the gift shop, which is full of religious medals and pendants, statuary, jewelry, crucifixes, crosses, prints, rosaries, cards, calendars, and more. The restored church is peaceful and beautiful; founder Serra's grave is in the floor near the altar. The gardens are lovely, as is the cemetery with its simple graves ringed with abalone shells. 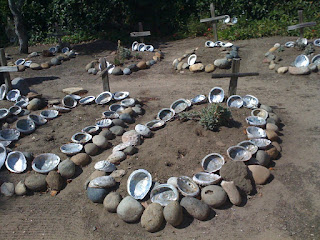 The mission has an active school, which was in session during our visit, and several museums, which would be a lot more interesting if the information provided was better and more complete. The Harry Downie Museum tells the story of the Mission's restoration in hard-to-read script; the Munras Family Heritage Museum displays personal items that belonged to a prominent Monterey family (hence Munras Street and Hotel Casa Munras), but with little explanation. There's a room full of elaborate priests' vestments—from when? No clue. A gallery with a large cenotaph (a tomb without a body) which I guessed (correctly) had something to do with Fra Serra, and the Convento Museum, which contains the cell in which Serra died in 1784. (The real cell?) It's the final stop on a tour that leads back to the gift shop.