In Conversation with Tim Sparks 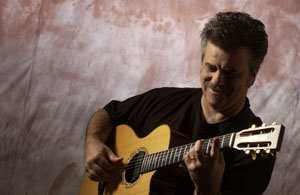 You can approach guitarist Tim Sparks’ music from several directions. You can enter through Tchaikovsky’s Nutcracker Suite, originally arranged for orchestra, rearranged by Sparks for six strings—a feat that won him the 1993 National Fingerstyle Guitar Championship. You can look for other CDs he has made for the German label Acoustic Music. You can track down recordings by the Twin Cities jazz group Rio Nido, popular during the 1970s and 80s and still sorely missed. You can enter through the bluegrass and jazz Sparks heard as a child and finally got around to recording on his new release, Sidewalk Blues (Tonewood, 2009).