Poet and author Quincy Troupe in conversation at the U 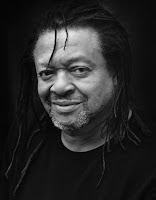 Each year, the NOMMO African-American Authors Series brings top authors to town for public conversations with University of Minnesota professor Alexs Pate. This Wednesday, April 28, at 7 p.m., you can come to Coffman Memorial Union and hear poet and author Quincy Troupe. And if you’re a U of M student or Friend of the University of Minnesota Libraries, you can hear him for free.
Troupe is a two-time American Book Award winner, World Heavyweight Champion Poet, author of 17 books, co-author with Chris Gardner of “The Pursuit of Happyness” (later a film starring Will Smith), and recipient of the Peabody Award.

Troupe’s poetry is infused with the rhythms, language, themes and improvisations of jazz. Here’s a verse from “Snake-Back Solo”:

And one from “Four, and More: for Miles Davis”:

Troupe credits Davis with changing his life. He was just 15 when he first heard the jazz trumpeter on a jukebox in St. Louis. The song was “Donna,” and he played it over and over. Years later he told radio show host Douglas Turner, “[Miles is] the one that set me on the path to writing and using my imagination, and being creative. ... Because I heard that music, he propelled me into this thing that I do now.”

One of Troupe’s American Book Award winners is “Miles: The Autobiography” (Simon & Schuster, 1990), on which he and the famously taciturn Davis collaborated. (If you get hung up on the F-word or you’re easily offended, this book is probably not for you.) In 1991, Troupe won the Peabody for “The Miles Davis Radio Project,” heard on National Public Radio. He chronicled his friendship with Davis in “Miles and Me” (University of California Press, 2000).

Troupe’s latest book is “The Architecture of Language,” a poetry collection published by Minneapolis’ own Coffee House Press in 2006. (Coffee House has been Troupe’s poetry publisher since 1996.) In a review for the literary journal Callaloo, Lucinda Roy described “Architecture” as “redolent with the fragrance of Guadaloupe, flavored by a strong sense of African American and Caribbean history ... and shaped by the rhythms of blues and jazz, hip-hop and rap.”

Hear Troupe talk about Davis’ “Blue in Green,” a song from Davis’ iconic album “Kind of Blue.” See and hear him in performance with jazz guitarist Phil Upchurch  at the Museum of Contemporary Art in San Diego.

On Wednesday, Troupe will read from and discuss his work with series host Pate, author of “Amistad,” the novel based on the screenplay (Signet, 1997), and “In the Heart of the Beat: The Poetry of Rap” (Scarecrow Press, 2009).

The NOMMO African-American Authors Series is co-sponsored by the Givens Foundation for African American Literature and the University of Minnesota Libraries. Past headliners have included Ntozake Shange, Amira Baraka, Lucille Clifton and Ishmael Reed. NOMMO is a Dogon word meaning “the magic power of the word.”