"My Funny Valentine" has a verse? 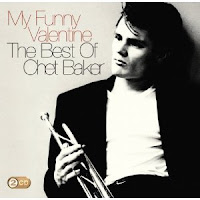 There's more than we know to many songs in the Great American Songbook. Specifically, the verse—the part that precedes the chorus ("chorus," aka "refrain," being that part many of us think of as the "verse").

It's kind of the introduction to the song, the stage-setter, the explanation, sung once at the start and (unlike the chorus) never repeated.

I like verses. Some are charmingly old-fashioned. Some reveal "facts" (if there are such things) about a song that give it an entirely different spin and meaning.

For example, the verse to "Tea for Two" (music by Vincent Youmans, lyrics by Irving Caesar):

I'm discontented with homes that I rented
So I have invented my own.
Darling, this place is a lover's oasis
Where life's weary chase is unknown.
Far from the cry of the city,
Where flowers pretty caress the streams,
Cozy to hide in, to live side by side in,

Don't let it abide in my dreams.

(Then the chorus begins:)

Picture me upon your knee
Just tea for two, and two for tea,
Just me for you, and you for me alone....

What we find out from the verse is the perfect life the singer imagines is all in her head. She's alone, lonely, and bitter.


Hear China Forbes of Pink Martini sing "Tea for Two" (verse and all) with the great Jimmy Scott.

I've just learned that "My Funny Valentine" (words and music by Rodgers and Hart) has a verse, too, and it's very strange.

Behold the way our fine feathered-friend
His virtue doth parade.
Thou knowest not, my dim-witted friend,
The picture thou hast made.
Thy vacant brow and thy tousled hair
Conceal thy good intent.
Thou noble, upright, truthful, sincere,
And slightly dopey gent,
You are:

My funny valentine
Sweet, comic valentine
You make me smile with my heart.
Your looks are laughable, unphotographable,
Yet you're my favorite work of art.

Is your figure less than Greek?
Is your mouth a little weak?
When you open it to speak, are you smart?

Don't change a hair for me,
Not if you care for me,
Stay, little valentine, stay!
Each day is Valentine's Day.

The verse makes the subject of the song even worse than we originally thought. Not just imperfect, but seriously stupid, clueless, and arrogant. Also, the verse makes him a man. The chorus is non-gender-specific. Which is probably why Chet Baker dropped the verse (he's credited with being the first to do so).

Here's Rufus Wainwright singing song and verse, with his mother Kate McGarrigle at the piano. (Thanks to Bethany Larson for this link.)

Why are verses dropped? Maybe because they're more narrative than musical. The chorus is always more interesting. "Tea for Two" might have lost its chorus when Art Tatum brought it into the jazz canon. Instrumentalists never (seldom?) play verses.

I always wondered if "Makin' Whoopee" (words by Gus Kahn, music by Walter Donaldson) had a verse. I'm not sure if either is official, but here's what I found:

Every time I hear that march "Lohengrin"
I am always on the outside lookin' in.
Maybe that is why I see the funny side
When I see somebody's brother take a bride.
Weddings make a lot of people sad,
But if you're not the one, they're not so bad.

Another bride, another June,
Another sunny honeymoon,
Another season, another reason
For makin' whoopee.

Another version of the verse:

Every time I hear that dear old wedding march,
I feel rather glad I have a broken arch.
I have heard a lot of married people talk,
And I know that marriage is a long, long walk.
To most people, weddings mean romance,
But I prefer a picnic or a dance.

One of the few songs rarely performed without the verse is Billy Strayhorn's "Lush Life." The song would be unimaginable without the verse, which is not just an introduction but a short story with the punch of Raymond Carver. And the music is more than rubato recitative.

I used to visit all the very gay places
Those come-what-may places
Where one relaxes on the axis of the wheel of life
To get the feel of life from jazz and cocktails.

The girls I knew had sad and sullen gray faces
With distingue traces that used to be there.
You could see where they'd been washed away
By too many through the day, twelve o'clock tales.

Then you came along with your siren song
To tempt me to madness.
I thought for awhile that your poignant smile
Was tinged with the sadness of a great love for me.
Ah, yes, I was wrong.
Again, I was wrong...

Life is lonely again, and only last year
Everything seemed so sure.
Now life is awful again.
A trough full of hearts could only be a bore.

A week in Paris could ease the bite of it.
All I care is to smile in spite of it.

I'll forget you, I will while yet you are still
Burning inside my brain. Romance is mush,
Stifling those who strive;

So I'll live a lush life in some small dive.
And there I'll be,
While I rot with the rest of those
Whose lives are lonely, too.

Here's Johnny Hartman and John Coltrane.
Posted by Pamela Espeland at 11:46 AM