The National Endowment for the Arts (NEA) recently submitted its 2012 budget (“appropriations request”) to Congress. It’s no surprise that cuts will be made, but it is surprising (at least to some people) that the NEA has proposed eliminating its Jazz Masters program.

Since 1982, 119 artists and groups have received Jazz Masters fellowships, the highest honor our nation bestows on jazz artists. Fellows are awarded grants (currently $25,000) and are invited to an annual awards ceremony and concert. You can read an alphabetical list of NEA Jazz Masters here. Or, if you prefer, a year-by-year list. Click on any name to learn more about a musician and his or her accomplishments.


Among jazz musicians and fans, being selected as a Jazz Master is a serious thing, our equivalent to being named a Living National Treasure in Japan. Once a Master, always a Master. Several Masters have come through the Twin Cities in recent months and years: Kenny Barron, Ramsey Lewis, Chick Corea, McCoy Tyner, Dave Brubeck, Ahmad Jamal, Roy Haynes. In 2011, in a rather controversial decision, the Marsalis family (father Ellis and sons Branford, Wynton, Delfeayo, and Jason) was collectively dubbed Jazz Master(s), and on Sunday, both Branford and Jason will perform in Minneapolis.
The question some people are asking is: Does it matter if the Jazz Masters award goes away? I’d like to know what you think. If you care to comment, please do so below.
Friday: Pat O’Keefe, Viv Corringham, Nathan Hanson, and Brian Roessler at the Black Dog
Now that the Clown Lounge has closed and Café Maude is winding down its live music on the weekends (this is the last weekend you can see live jazz at Maude, and only on Friday), the Black Dog in St. Paul is the only place that regularly features improvised music.

Hats off and thumbs up to owner Sara Remke for continuing to make space for the music, and to Nathan Hanson for programming (and playing) it.

I can predict that this night will be unpredictable, with Zeitgeist’s Pat O’Keefe on clarinets, Viv Corringham on voice, Hanson on saxophone, and Brian Roessler on bass. Corringham is a British vocalist and sound artist who treats her voice like a wind instrument. I promise you’ve never heard anything like it.
8-ish p.m. Friday, Feb. 25, Black Dog (corner of 4th and Broadway in St. Paul’s Lowertown). No cover, but show some love to the tip jar. 651-228-9274.

Friday and Saturday: Andres Prado Quintet at the Artists’ Quarter
Peruvian guitarist Prado lived in the Twin Cities for two years (2005–07) before returning to his native country. If you saw him back then, you’ll need no convincing to head to the AQ this weekend. If you didn’t, here’s a video Don Berryman made in July 2007. The same quintet—Prado on guitar, Peter Schimke on piano, Pete Whitman on sax, Jeff Bailey on bass, Kevin Washington on drums—will reunite for two nights of music and magic. I saw Washington at the Dakota earlier this week and he’s pretty excited about it. Expect jazz flavored with Afro-Peruvian rhythms, Andean and Amazon melodies, and Peruvian shamanic chants.
9 p.m. Friday and Saturday, Feb. 25-26, Artists’ Quarter (basement of the Hamm Bldg. in St. Paul). $15.
Sunday: Benefit for Dave Graf at the Artists’ Quarter
If you read Jon Tevlin in the Strib, you might recall a recent column about ice dams in which he describes how a certain trombonist “put a ladder from his deck to his roof, and began to knock snow down with a shovel. Unfortunately, the deck was lightly frosted, and the ladder slid out from under him.” That trombonist was Dave Graf, who broke his pelvis and an arm. Graf is a mensch, near and dear to many of us, and the spill temporarily sidelined him from playing. Friends, fans, and supporters will gather for a benefit on Sunday. Performances by the Brian Grivna Quartet, the Tanner Taylor Trio, Locally Damaging Winds (a 7-piece ensemble with a 4-trombones front line), and Lucia Newell will be followed by a jam session. Do good and hear good music.
5 p.m. Sunday, Feb. 27, Artists’ Quarter (basement of the Hamm Bldg. in St. Paul). $10 suggested donation.
Sunday: An Evening with Branford Marsalis and Terence Blanchard at Orchestra Hall 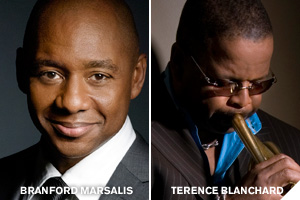 This is the week’s BJD (Big Jazz Deal) event. Both Marsalis and Blanchard have won multiple Grammys. Both are sons of New Orleans, and each is a major voice in the music. Trumpeter Blanchard has scored more than 50 films (he works frequently with Spike Lee); saxophonist Branford is equally at home in jazz, classical, blues, and funk. Each will perform with his own ensemble. (Although jazz musicians have a shared vocabulary and can and often do play with complete strangers, it’s a whole different thing to hear a group that has been together for years.) It’s my understanding that Blanchard and his quintet will play first, and Marsalis and his quartet will play second, after intermission. So you can hear two great groups on one night without going out into the cold. Read my interview with Marsalis on MinnPost.com.
7 p.m. Sunday, Feb. 27, Orchestra Hall in Minneapolis. $25–$60, $75 VIP. Tickets online or call 612-371-5656.
Sunday and Monday: Jason Marsalis Quartet at the Dakota 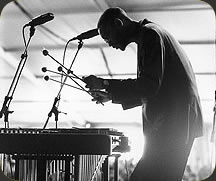 While big brother Branford is performing down the block, young Jason will hold his own at the classy Minneapolis jazz club. I have only seen Jason as a drummer; this time, he’s on vibes. Sounds intriguing. (Listen on his website; click any of the pink stars beside “select music” on the home page.) His quartet includes Austin Johnson on piano, Will Goble on bass, and David Potter on drums, all of whom have studied and/or performed with the pianist Marcus Roberts.
7 p.m. and 9 p.m. Sunday and Monday, Feb. 27–28, Dakota, 1010 Nicollet Mall. $20. Tickets online or call 612-332-JAZZ (5299).


Check the live jazz calendar at the right or here for many more events.
Posted by Pamela Espeland at 5:57 PM