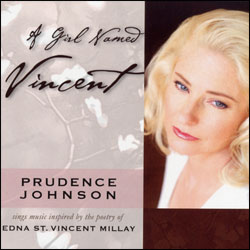 Why don’t more musicians look to poetry for song lyrics? Prudence Johnson’s latest CD, A Girl Named Vincent, in which every song is a poem by Edna St. Vincent Millay, suggests that more lyricists should shelve their rhyming dictionaries and head for their local library’s poetry section.
A Girl Named Vincent is a work of transcendent beauty and unexpected breadth. We’ve all heard pretentious and deadly art-song arrangements of poems; this is as far away from that as you can get. A Girl Named Vincent is a rare pairing of wonderful words with tuneful, totally listenable music. It's full of feeling and meaning, and often fun. These are songs you can (and will want to) hear again and again, hum along with, tap your foot to. It’s easy to imagine some of them entering the jazz canon: “The Penitent,” “Ashes of Life,” and “I Shall Forget You Presently” (which could have been written by Mose Allison).
Though all the poems are by Millay, the music is by four different composers: Laura Caviani, Joan Griffith, Michelle Kinney, and Gary Rue. Each composer is also a musician, and all play on the album: Caviani on piano, Griffith and Rue on guitar, Kinney on cello. The songs range from blues to ballads, jazz to folk. “She Is Overheard Singing” is a sea chantey; “Recuerdo” dances in church; “Exiled” hails from south of the border.
The common threads are the instrumentation (piano, guitar, bass, cello, drums, percussion, the occasional saxophone) and Johnson’s voice, itself a finely tuned instrument. Often described as a “silky alto,” it’s clear, resonant, and expressive, with precise diction (perfect for poetry) and a lush, warm vibrato she occasionally flattens for effect. Occasionally, she’s joined by Diana Grasselli and Gary Rue for added layers and harmonies.
Guided by the lyrics, which everyone seems to have known and understood because the music pairs so well with them, A Girl Named Vincent covers an expanse of emotional ground. “Afternoon on a Hill,” the opening track, is a celebration of simply being alive. “The Penitent” is an unrepentant meditation on having sinned (“If I can’t be sorry, I might as well be glad”). (The flattened vibrato works brilliantly here, as does Dave Karr’s sassy tenor sax.) “Exiled,” “The Philosopher,” and “Travel” are full of longing—for the sea, for a lover, for anyplace but here (“There isn’t a train I wouldn’t take/No matter where it’s going”).
“She Is Overheard Singing,” the sea chantey, is a sly commentary on the fact that women find bad men attractive. “Sorrow,” which moves at a measured, funereal pace, becomes almost unbearably sad with the entry of Kinney’s cello. “Recuerdo” shares the carefree, in-the-moment bliss of “Afternoon on a Hill,” but the waltz is rooted in gospel made golden by Kathy Jensen’s saxophone. “Ashes of Life” is ineffably weary (“Life goes on forever like the gnawing of a mouse”), “I Shall Forget You Presently” (one of Millay’s many sonnets) cheeky and bittersweet.

Throughout, there's variety in both the words and the music. And there are hold-your-breath moments: the gorgeous opening phrases of "Afternoon on a Hill;" the defiant, jarring harmonies at the end of "The Penitent;" the last long fading note of "Travel," like a train whistle in the night; the repeating tomorrows of "Ashes of Life."
Johnson saves the thorniest poem for the end, the brooding, ultimately redemptive “Journey.” It’s also the most emotionally challenging song. It’s hard to imagine anything coming after it, making it the likely closer for live performances of this exceptional song cycle.
Intelligently conceived, impeccably crafted, A Girl Named Vincent is a stellar recording. It sounds like a project everyone embraced from the start, and one to which they all gave their best. Each song is a story, its own little world. No two are alike, and none is expendable. Somehow the music sounds both classic and brand-new—in other words, timeless. It's everything we hope for when we slide a new CD into the player.
Upcoming live performances of A Girl Named Vincent
With Prudence Johnson, voice and ukelele; Laura Caviani, piano and voice; Joan Griffith, acoustic and electric bass, guitar and mandolin; Michelle Kinney, cello and voice; Joe Savage, pedal steel guitar, harmonica, and voice; Marc Anderson, percussion
• March 25, 7 pm, Anoka-Ramsey Community College Theatre
• May 6, 7:30 pm, Northern Lakes Arts Assoc. Presents in Ely, MN
• May 7, 8 pm, Weber Hall, UMD campus, Duluth, MN
• May 8, 2 pm, Reif Performing Arts Center, Grand Rapids, MN
• May 21, 7:30 pm, Arrowhead Center for the Arts, Grand Marais, MN
• May 26, two shows: 7 and 9 pm, the Dakota, Minneapolis
• June 18, 8 pm, St. Mane Theatre, Lanesboro, MN
• June 24, 7:30 pm, Palace Theatre, Luverne, MN
• June 25, 7:30 pm, Paramount Theatre, St Cloud MN

• Read about Edna St. Vincent Millay on the Poetry Foundation website.
• Find several of her poems here.
Thanks to Dave Graf for many of the fine points.
Posted by Pamela Espeland at 8:58 PM