Crosby, Stills and Nash at the Orpheum 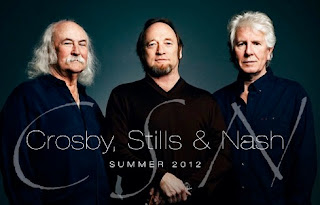 Off the jazz path, I've finally seen Crosby, Stills and Nash live for the first time. Not in their heyday, not at their peak, but still vital and meaningful and musical. Find a brief review of the show (Monday, Aug. 6 at the Orpheum in Minneapolis) on MinnPost.com. Here's the setlist with more notes.

It's a sold-out show, a full house of a certain age. Crosby and Nash have very white hair. Nash performs barefoot. They don't seem tired of songs they've been singing for decades. Stills' voice isn't what it used to be, but Crosby and Nash sound great, even a cappella.

"Long Time Gone" evokes in me a rather fierce nostalgia for the days when people believed that a song could change/rearrange the world. After "Southern Cross," Nash tells the crowd, "We're enjoying the shit out of this." "Lay Me Down" is a new song by James Raymond, Crosby's son, who plays keyboards in the band. "Radio" is a new song by Crosby, who introduces it by explaining that it sounds like it has a marine theme but it's really about reaching out and helping others. "Almost Gone" is a new song by Nash and Raymond about Bradley Manning, the American soldier accused of giving sensitive documents to WikiLeaks. Here are the lyrics. Bill O'Reilly hated it. To me, it's strongly reminiscent of "Ohio." A rocker. "Bluebird" is an old Buffalo Springfield tune. I was glad Stills sang "Love the One You're With." So his voice isn't the greatest; it's his song, and you can hear him in it. They introduce all the new songs but expect us to know the rest, which we do.

The set begins with Crosby and Nash both commenting on a women sitting near the front who spent much of the first set texting. "You could do that outside," Crosby says. "You don't have to pay for a ticket to text." "Someday," Nash adds, 'YouTube and Twitter and Facebook will merge into a new thing called YouTwitFace." It's mean but not undeserved. Photography (no flash) is allowed, but no recording, so we see camera phones raised everywhere. I thought HH would have to watch most of the concert on the phone of the woman sitting in front of us, who had it up in the air for much of the night, taking fuzzy pictures. At least the band doesn't pull a Keith Jarrett and walk off the stage.

The second set is harder-rocking and also more intimate and acoustic. Stills' guitar shines. "In Your Name" is a new-ish song (2007) about the violence and atrocities committed in the name of whatever we call our higher power. Pointedly, they dedicate it to the families of people killed in the Sikh temple shooting in Milwaukee earlier in the week. "North Country Fair" is a Bob Dylan cover, with just CSN and Stills on acoustic guitar. It's gorgeous.

"In Your Name" hinted at things to come; this is also the more political set of the show. Crosby introduces "What Are Their Names" by saying, "The men who wrote our constitution did not intend that the guy with the biggest TV budget gets the keys to the kingdom." I think "Names" must be new but learn later that Crosby wrote it in 1971. Some people in the Orpheum crowd are not amused. We hear a few anti-Obama shouts, and "The right to bear arms!" and "We came to hear music, not your politics!" and, when one of the trio mentions that he's recently been in Japan, "You should have stayed there!" It almost gets ugly. The band plays on.

The next song, for which I don't catch the title, is a new Crosby composition; he says this is only the second time he has performed it live. It's about the life of a young prostitute. A human rights song. The crowd doesn't quite know what to do with it, and they're largely silent throughout, but they applaud at the end. "Guinevere" is just Crosby and Nash, with Crosby on guitar. Lovely. "Daylight Again" merges into "Find the Cost of Freedom," still the acoustic trio. The band returns for "Cathedral." "Immigration Man" could have been written yesterday; Nash wrote it in 1972, but it seems more incendiary today.

I went into this concert knowing it would probably be an emotional experience for me, but I don't actually lose it until "Our House." Maybe because it's a love song and I'm a sucker for a good love song (and even some bad ones). Maybe because HH is holding my hand. Maybe because it's a beautifully framed watercolor of a perfect moment in time: sweet, innocent, safe. A place no one would ever want to leave.

Two rockers to end: "Almost Cut My Hair" and a ramped-up "Wooden Ships." One encore: "Teach Your Children."

Two generous, lengthy sets. Many high points. Timeless songs, shimmering harmonies. Crosby, Stills and Nash might not be doing this in ten years, but they're doing it now, and if they come your way, you should catch them if you can.

Posted by Pamela Espeland at 12:09 PM