Maud Hixson is a jazz vocalist based in Minneapolis, Minnesota. She has performed with international artists including Warren Vaché, Jon Weber, and Evan Christopher. In October 2012, she appeared in concert with Richard Rodney Bennett in the Midtown Jazz Series in New York. bb

“Whatever happens from here on in, I’m way ahead of the game,” goes the Johnny Mercer lyric from a song he wrote with Robert Emmett Dolan, which I first encountered on a recording by singer Carol Sloane. “I’m Way Ahead of the Game” is one of those songs that on first hearing seems always to have existed. It turns out Sloane learned it from composer and pianist Richard Rodney Bennett.

I discovered this when Bennett and I struck up an email correspondence last winter, after he heard my recording of the song. I read up on him and found his staggering resumé: composer of over 50 film scores; jazz pianist extraordinaire; knighted! My first notes to him were tentatively addressed to “Mr. Bennett,” then “Sir.” He came back with “Mr. Bennett, indeed!” and “The Sir is only for people who don’t know me.” 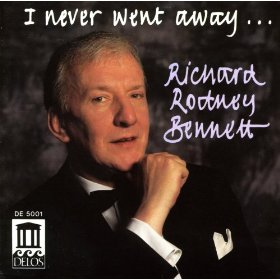 I bought a copy of I Never Went Away, a CD of just him at the piano, singing standards and some of his own songs. I already liked him so much personally that I wondered what I would do if I didn’t enjoy it. I put it on and instantly sensed that he would be taking great care of all matters of taste and musicality, honesty, and emotion; all I had to do was take it all in. I was moved by his title song, his choices of others’ songs, the Devonshire lilt in his voice. His ideas at the piano were wonderful. It wasn’t long before we discovered our mutual love of Noël Coward, and Richard invited me to visit him in New York to see “Star Quality,” the Coward exhibition that was coming to Lincoln Center’s Library for the Performing Arts.

This narrow path widened into a flight from Minneapolis to New York on Easter Sunday, 2012 (with a short detour on the subway--I went to 125th Street and had to turn back). I spent a few minutes bracing myself on a sun-warmed bench in the Bull Moose Dog Run across from his apartment as I prepared myself to meet this great man. I needn’t have waited, as he welcomed me like an old friend. In no time at all, he’d consumed the chocolate I’d brought him, spurned the tea (he said he’d detested tea since boarding school), and was plying me with his homemade egg-drop soup and the verse to “I’m Way Ahead of the Game” from his lead sheet. Neither of us had ever been able to find the original sheet music.

We offered up our stories to each other--like the one about his dinner with Bette Davis, where he and the other guests hunted all evening for her brooch, which she later found she’d left at home. I had recently seen the movie Bennett and Davis had worked on together, The Nanny (for which he’d written the score), and I told him about finding my way towards jazz as a teenager through the MGM musicals of the 1940s. We also conversed with his cats, Mabel and Amelia.

The next day, at the Noël Coward exhibition, I was staring into a glass case at the book Coward had on his bedside table when he died (The Enchanted Castle by E. Nesbit) when Richard crooked his index finger at me from across the room with a grin. He was standing near a black-and-white photo on the wall. It had been taken during what Coward termed “Holy Week,” a series of events in London celebrating his 70th birthday. This particular image was from the Midnight Matinée, a performance that ran from midnight till 4 a.m., and Richard was onstage with the other performers. He told me he had played Coward’s “Poor Little Rich Girl” and “Sigh No More,” later being complimented by the Master himself for his harmonies.

There were other treasures in the exhibition, like a rather unbelievable and charming letter from Garbo to Coward proposing marriage on a long-ago Leap Year Day. Then we came upon a man who greeted us warmly--Richard pulled his beard--and was presented as set designer and costumer Tony Walton. He and Richard had worked together on the film Murder on the Orient Express, and I mentioned to Richard later that I’d read about Tony in Julie Andrews’ autobiography, which also contained a memorable piece of advice. Andrews’ voice teacher had once explained to her the difference between an amateur and a professional: the amateur practices till they get it right, the professional till they can’t go wrong.

A few days later, we went to hear Richard’s friend Joyce Breach sing at the Midtown Jazz Series at Saint Peter's Church. They’d made a wonderful album together, Lovers After All. Before I knew it, Richard and I had been booked to perform a concert for the same series in the fall. So I went back to Minneapolis and put the date on the calendar: Wednesday, October 17, 2012.

I read a quite thick biography (and very funny read) about Richard’s life and began to delve even further into his body of work, enjoying his scores for Indiscreet and Far from the Madding Crowd; his albums with Cleo Laine and other singers; his own songwriter tributes to Johnny Mercer and John LaTouche. Meanwhile, Richard was in London, touring with singer Claire Martin and enjoying his flat there. He told me in an email that a friend of his had recently asked him what he thought of me. “I told him you were a mean bitch,” he joked. He was back in New York by August, and he invited me to come again and work on our concert. I combined this with a trip to New Jersey to play a club date at Shanghai Jazz with trumpeter WarrenVaché.

Richard loved to cook. He gave me his recipe for Eggs Mollet, and they’re so popular at my house now that they’re simply referred to as The Eggs. He introduced me to Zabar’s deli on my first visit, and I’ve been pining for it ever since. He showed me how to make his famous Italian pine nut tart and taught me to chop onions without tears by biting on a wooden spoon (of course, he just did it, then waited for me to ask him what he was doing). He also began drawing me little bus maps, as my transportation misadventures continued, and he admitted he had never really taken the subway in New York.

He was fond of making lists, usually seated at his drafting table where he read or worked on collages. His walls were covered with collages and bookshelves. I found the Noël Coward section in his library, and he pointed out the first book of Coward’s he’d acquired in his youth, Collected Sketches and Lyrics, and gave me his extra copy. I stayed up late reading it in bed, laughing at Coward’s own Cockney parody of a scene from his play Private Lives.

We both had best friends from school days named Veronica (mine lives in Brooklyn now), and I came back from an outing with her to find him engrossed in the journals his Veronica kept during their time together at the Royal Academy of Music in London. He said it seemed they were forever going out dancing and having the flu, and he wondered where they got the energy. We also sat at his two upright pianos in his study and shared songs. On my first visit, he was playing away, and when I asked him if he’d like to play something of his own, he looked up at the wall in front of him, proclaimed “I’m not interested!,” then went on playing songs by other people.

He played many of his favorite recordings for me, and I played some that I’d brought along for him to hear. One I’d been intrigued by after hearing it in a Dickens bicentennial program was a song by William Walton. Richard retrieved a book of his compositions for me to peruse and told me that he’d enjoyed a long correspondence with the composer, later discovering that he was one of only a few people who wrote to Walton in his later life. Richard said he wished he had known that, because he would have written to him every week.

When I returned to New York in October, Richard met me at the elevator, and I crowed “I didn’t go to 125th Street!” When we took the bus together, I got to watch him scare the daylights out of riders who were speaking too loudly on their cell phones. He would begin with a very loud “SHHHH!” which made them jump out of their seat. They would forget a minute later and he would follow up with a percussive “Shut! Up!” that would finish them and start a wave of giggling in the bystanders. He took enormous pleasure in it--“It’s my new thing!”

He made curry for me and his dear friends Gerry Geddes and Frank Underwood before we all headed to Birdland for open mic night. The names and characteristics of various singers were bandied about. When Rod Stewart’s came up, I mentioned the fact that whenever I hear a recording of his in a public place, in the time it takes me to figure out whose voice I’m hearing, I invariably think, “Who’s that old lady?” That got a spit take from everyone at the table. Later that evening, performing for a hushed crowd, Richard sang and played “A Nightingale Sang in Berkeley Square,” announcing it as “a song from my childhood.” Then he brought me up to sing Harry Warren’s “The More I See You,” and when we sat down again, Lorna Luft came over and said into my ear, “That was great!” I couldn’t help thinking of her mother’s famous line: “Toto, I’ve a feeling we’re not in Kansas anymore.”

On the day of our concert, we put the finishing touches on our program, and I asked Richard if I could use his iron. He slammed his open hand on the kitchen table and said, “There are limits!” We took the bus to Saint Peter’s in Midtown and spent a sunny hour sharing great songs. They included Mercer and Kern’s “I’m Old-Fashioned” (with Richard singing Noël Coward’s additional lyrics) and, of course, “I’m Way Ahead of the Game.”

There was such a feeling of expansiveness in the space, the sound, the warmth of the crowd, and the arrangements, if you could call them that. We’d installed certain signposts along the way, but those didn’t stop us from just listening and moving as a unit, which we did so easily (and stylishly, I thought) that I had no nerves and was overjoyed. Afterward, we laughed and chatted over lunch with many of his friends, including Ronny Whyte, who had booked us for the concert.

It’s hard to realize that performance was Richard’s last. Like the song says, “I’ve had the kind of adventure I’ve read about, I’m way ahead of the game.” After I returned home, I met a rare music collector via email who found the original sheet music for the song and sent it to me. I mailed a copy to Richard, and it was the last thing I was able to give him. He gave me so many songs and stories, and his faith and humor and love. I already miss him terribly.