'Catch Them While You Can': An evening of mixed emotions with musicians of the Minnesota Orchestra

Musicians of the Minnesota Orchestra gave a beautiful concert Friday night at St. John’s Episcopal Church, a neighborhood church in south Minneapolis. Not all of them were there; not all of them would have fit. The fourteen who came played an evening of chamber music titled "Catch Them While You Can," in honor of four who are leaving soon for jobs elsewhere.

They were there to raise money, because they have been locked out for eight months (the entire 2012-13 season) with no salary or benefits; to stay connected with their audience, which that night included their great benefactor Judy Dayton; to say their own public farewell to the four departing musicians; to give us a chance to hear them play together for the last time; and for the sheer joy of playing together before an audience. If the last reason sounds strange under the circumstances, you didn’t see principal cello Tony Ross’s face as he and concertmaster Erin Keefe exchanged glances, or when Burt Hara turned an especially delicate phrase on his clarinet. Ross has always seemed like a serious man, and lately like a frustrated and angry man, but for brief moments that night, he looked genuinely happy.

Ross, who isn’t leaving (yet, as far as we know), and Hara, who is (for the Los Angeles Symphony), are members of St. John’s Episcopal, and before the concert began, we heard from another member that “Tony and the gang” had helped raise a lot of money for the church’s outreach efforts, including Habitat for Humanity. Hosting this concert was “our chance to pay them back.”

We heard Bach’s Brandenburg Concerto #6, a proud and elegant work for strings and continuo. “We like to call that piece the viola Brandenburg,” Ross told us after. He served as host for the evening. Principal viola Tom Turner, one of the seven musicians who performed the concerto, has taken a position with the San Diego Symphony. Cellist Pitnarry Shin will join her husband, Kyu-Young Kim, in New York. Kim was principal second violin for the Saint Paul Chamber Orchestra; he found another job during that orchestra’s lockout, which ended just in time to salvage the final concerts of their season. On harpsichord: Layton “Skip” James, who retired in 2009 after 40 years as principal keyboard with the SPCO. The Minnesota Orchestra has an endowed chair for a principal keyboard, but there’s no one in it.

The Brandenburg was followed by a piece that was new to most people in the room, including the musicians. They wanted to play something spicy, and principal second violin Gina DeBello, who has accepted a position with the first violin section of the Chicago Symphony Orchestra, suggested String Quartet No. 3: “Tapas,” by Chicago composer Marc Mellits. “We decided to play it because we had a group who could do it,” Ross explained. They learned its eight short movements, “small plates,” in two weeks.

“Tapas” looked and sounded like a workout for the musicians – not unmusical, but challenging and contemporary. It wasn’t something we usually hear from the Minnesota Orchestra.

After the intermission and before the closing piece, Mozart’s Clarinet Quintet in A Major, Ross gave the talk that has become a regular part of the musicians’ concerts since the lockout began. When violist Sam Bergman gives the talk, he breathes fire. Ross is more than capable of burning down the house, but this night’s talk was more sad than angry.

He began by thanking the crowd. “Your support has buoyed us in this tragic year … Our silver lining is you. None of our board or management have attended any of our concerts [since the lockout] and seen your passion … We’re down to 73 musicians [from 98]. In every year, there are three or four auditions; being down to 73 is not normal … This orchestra is our family. The most painful moments have come when people leave … The fabric of our orchestra is unraveling at an alarming pace.” He spoke briefly about the work we were about to hear, and about Burt Hara: “Nobody can resist his tone who has a heart.” 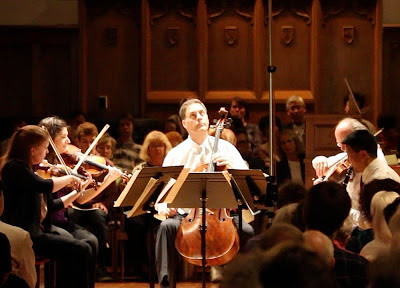 And then they played the Mozart: Hara, concertmaster Erin Keefe, DiBello, Ross, and Turner. The one good thing about the lockout – and I write this as someone who sat in a pew – is the chance to hear these exceptional musicians in different settings and configurations. In this small, intimate church with its peaked wood ceiling (and very attentive crowd), we could hear everything: fingers on strings, the resonance of the fine instruments that professional musicians play (when they can afford them, which might not be for long), Hara’s warm, human breath in his clarinet. We should remember that before professional orchestras and public concert halls, the only people who ever heard highly trained and skilled musicians play such instruments were kings, emperors, and popes.

The Mozart was exquisite. Following a standing ovation that wouldn’t stop, the musicians returned for an encore – a selection from the Larghetto, a movement so universally touching that it is played at both weddings and funerals. It was the perfect ending to an evening of mixed emotions. Joy in the music, sorrow in losing four more musicians to a lockout that seems endless.
__________

A note about the photos

Tony Ross, whom we met at the check-in desk, allowed photos but cautioned John: no shutter noise, no flash. This would be a subtle, up-close-and-personal sort of concert. The layout of the church, the compact size of the chancel, and the size of the crowd prevented use of the "foot zoom." So John recorded much of the evening on his camera's video, then viewed countless frames to find those that would make good stills. The photos from the reception were taken as usual.

Posted by Pamela Espeland at 9:24 PM