Ginger Baker at the Dakota: Why?

The title of last night’s encore, “Why?” is a good question to ask about Ginger Baker. Why, at 74 and in poor health, is the former Cream and Blind Faith drummer, Rock and Roll Hall of Famer, cantankerous subject of the 2012 documentary "Beware of Mr. Baker,"  hellraiser (his word, and the title of his autobiography), and one of the worst interviews ever, on the road again?

In part, because he needs the money. He recently told Rolling Stone that was one of the reasons he was touring (“You have to earn money to live, don't you?”); he told the British newspaper The Mirror that a woman he hired in Africa as his personal accountant had stolen from him. He took her to court and won, but he lost his polo ranch in South Africa and all of his horses. Baker now lives in England again, with his fourth wife and stepdaughter.

And because he enjoys the music. Why jazz, of all things? Baker has always loved jazz. He started out as a jazz drummer in the 1960s and brought its colors and complexities along when he moved into rock and superstardom. In the 1990s, he formed the Ginger Baker Trio with Bill Frisell and Charlie Haden and later created a group called the Denver Jazz Quintet-to-Octet (DJQ2O) with trumpeter Ron Miles and bassist Artie Moore. He played with Elvin Jones, Max Roach, and Art Blakey. His double-bass-drum kit is a direct descendant of Louis Belleson’s.

So Baker is not just another former rock (or pop, or country) star who decides to make a comeback through jazz. He’s been a jazz musician all along. In fact, don’t call him a rock drummer. He prefers jazz drummer.

Anyone in the audience at the Dakota who was hoping for some “White Room” or “Sunshine of Your Love” was put straight by the first song of the night, Wayne Shorter’s “Footprints,” a jazz classic newly infused with African polyrhythms. The rest of the set brought blues and world music and more jazz.

Baker ended each song by telling us what he had played and introducing the next. The set list:


“Footprints” (Wayne Shorter)
“Twelve and More Blues” (Pee Wee Ellis)
“Ain Temouchant” (written by Baker, who introduced it with this story: “I wrote this in the Atlas Mountains in the north of Algeria, where I managed to drive my car at very high speed off a mountain and land on an olive tree in a little village.” It appears on the 1994 Ginger Baker Trio album “Going Back Home.”)
?? (I didn’t catch the name, but Pee Wee threw in a little “Caravan”)
“Ginger Spice” (Ron Miles; from the 1999 DJQ2O album “Coward of the Country”)
break
“Cyril Davies” (Baker; a blues from “Coward of the Country”)
“St. Thomas” (Sonny Rollins)
“Aiko Biaye” (Yoruba folk song from Lagos)
encore: “Why?”

How was the show? It was good. Very good, and often thrilling. Heavy on the drums, but that’s what everyone came to hear. The legendary, terrifying Ginger Baker, live! Especially when Baker and Dodoo fell into a groove, it was all about the drums, pounding and interweaving those intricate rhythms in among the thunder of Baker’s two basses. Ellis eschewed the funk for which he’s famous and stuck to straight-ahead jazz, making sounds that probably surprised some of his fans in the house: sustained notes, like singing.

It was direct and serious and down to business. In some ways, it was more like a rock concert than many jazz performances; players took solos, but they were short, with no out-there improvisations that can make those unfamiliar with jazz squirm in their chairs. Last night won’t go down in history as the most transcendant or revelatory jazz concert ever, but it was one that a broad cross-section of music lovers – jazz fans, rock fans, ’60s survivors and hipsters – could appreciate and enjoy.

Touring is not easy for Baker. He has COPD (chronic obstructive pulmonary disease), caused by smoking, and he still smokes; he says it helps him deal with the pain of another serious medical condition that plagues him, degenerative osteoarthritis of the spine. He told The Mirror that “drumming is agony.” He doesn’t launch into five- or ten-minute solos anymore, but neither does he hold back, even when it hurts, and from what he says, it always hurts.

At the Dakota, he took a 20-minute break midway through because he needed it. When he talked to the crowd after playing a tune, he was short of breath. When he stood up, Dodoo moved in to help him walk off stage. “Let me recover a bit,” he said before the break. “I’m getting too old for this.” When Baker returned, after playing “Cyril Davies” (what he called “the lull before the storm”) and then “St. Thomas” (the storm), he said, “I’m far too old for this. It’s not a joke, it’s serious!”

It was Dodoo who urged us to call him back for the encore. “Make some noise!” he shouted. “Say Gin-gah Ba-kah! Gin-gah Ba-kah!” We did. When the band returned, Baker introduced the encore with, “Terrible things have happened to me in the past, and they keep happening right up until today. And always, when these things happen, I ask a question: Why?” And we sang along: Why? Why? Why? 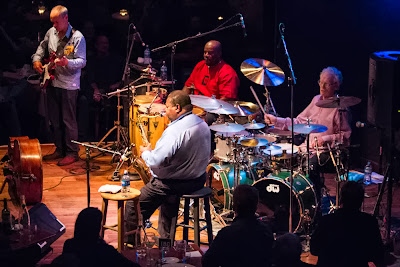 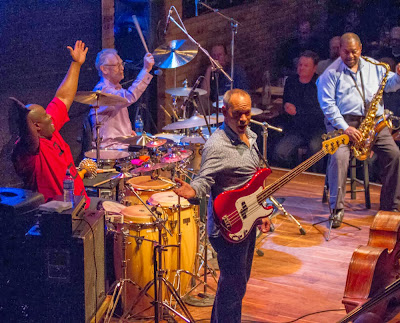 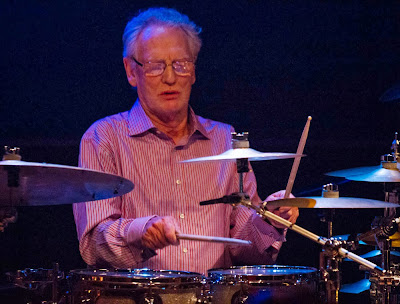 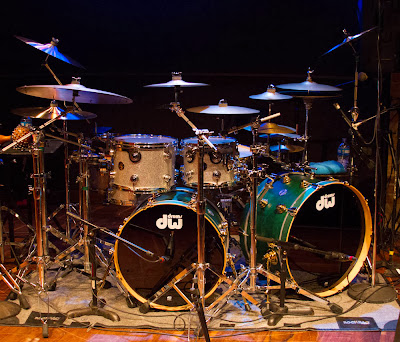 Posted by Pamela Espeland at 11:20 PM