One great thing about jazz is the pick-up band. Someone’s on the road or comes to town, finds two or three more musicians and plays a night or two. The So-and-So Trio is really so-and-so from New York, Chicago, Detroit or New Orleans plus the bassist or pianist you saw last night at Jazz Central and the drummer or saxophonist who just played the Black Dog, the Dakota, Ice House or Crooners.

Another greater thing about jazz is the band that’s been together for a long time. When they’re still together because they want to be – even when life happens, even if everyone individually plays with or leads a bunch of other bands – it’s about more than music. It’s about history, friendship, trust, respect, collaboration and connection. They’ve grown together and learned from each other. You want to be in the room with them and hear what they have to say, to feel that camaraderie and shared creativity.

On Friday at Vieux Carré, Atlantis Quartet– Brandon Wozniak on saxophone, Zacc Harris on guitar, Chris Bates on bass and Pete Hennig on drums – will bring their 12 years as a band to the stage as they release their fifth album, “Hello Human.” The title track nods to the fact that all four are now dads, which wasn’t true when the band formed in 2006. Back then the bassist was Travis Schilling, who appeared on their first album, “Again, Too Soon” (2007). Bates had stepped in by 2009, when “Animal Progress” came out. That was followed by the live album “Lines in the Sand” (2011) and “Expansion” (2013).

Meanwhile, Atlantis was named Best Twin Cities Jazz Artist by City Pages and the Star Tribune. They performed in The Current studio. In 2015, they won a McKnight Fellowship for Performing Musicians, a $25,000 prize that opened the door to “Hello Human” and four days at Pachyderm Studios in Cannon Falls, where a blizzard was Nature’s way of saying get to work. 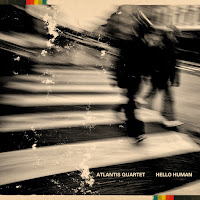 Every track on “Hello Human” is an original. All four band members are composers and terrific improvisers. The only times I’ve heard them perform other people’s music was during a series of Halloween shows, when they played classic albums in their entirety: Coltrane’s “A Love Supreme” (2008), Herbie Hancock’s “Headhunters” (2009), Led Zeppelin’s “Houses of the Holy” (2011) and Sonny Rollins’ “The Bridge” (2012). (Those concerts were really fun, by the way, hint hint.)

Along with Bates’ musings on fatherhood (and, by extension, acknowledging each other’s humanity), “Hello Human” includes songs inspired by the connective tissue of the body’s bones and joints (“Ligaments”), a place where five roads converge (“Five Corners”), ancient Chinese medicine (“Meridians”), the music of Ornette Coleman (“Just Ate”), and the stresses and demands of our modern technological world (“Ghost Tensions”).

From the earliest days, Atlantis has always had its own distinct ensemble sound, no matter what the musicians were playing. You can listen to “Again Too Soon” and “Hello Human,” two songs 12 years apart, and know you’re hearing the same band. And it doesn’t matter whether they’re playing a fiery, high-energy tune or a tender ballad.

Their music can be serious and playful, rowdy and lyrical. It can lead you down a path with a lot of sharp turns. Often complex and unpredictable, it’s never off-putting. The door is always open to those who want to listen.

Atlantis Quartet plays Vieux Carré on Friday, Nov. 23, at 9 p.m. FMI and tickets ($15/10). From there, they go to the Jazz estate in Milwaukee (Nov. 24) and the Tonic Room in Chicago (Nov. 25). “Hello Human” is on the Twin Cities-based collective label Shifting Paradigm Records. Here’s an album preview for “Hello Human.”
Posted by Pamela Espeland at 6:57 PM