Can the pipe organ be cool?

A new generation is creating cutting-edge music on this 'big toy box full of sounds.'

What is old can be new again, in the right hands and under the right feet. For example, the pipe organ. With origins in ancient Greece, it is associated today mostly with church music and horror films.
Pipe organs are big, expensive, and complicated. Most have multiple keyboards, called manuals, and a pedalboard. Each manual can play many different sounds, controlled by knobs called stops. Organs are the opposite of portable. Each is site-specific, built for the space it occupies. An organ can have many thousands of pipes, hidden behind walls and even under the floor. Once they’re installed and voiced, they’re meant to stay put.
Until the building comes down, or is renovated or burns. After the devastating Notre Dame fire in April, musicians around the world waited anxiously to hear if the Grand Organ with its five manuals and almost 8,000 pipes survived. It did.
If you want to hear a pipe organ — and for some people, that’s a big if — you have to go to a church or a concert hall. And while the organ repertoire is vast and majestic, it’s rarely cutting-edge.
But that may be changing. Last month, the wildly talented young British organist James McVinnie, who zoomed to fame when he played at the wedding of Prince William and Kate Middleton, joined London-based electronics duo Darkstar at the University of Minnesota’s Northrop auditorium for the world premiere of a Liquid Music Series commission called “Collapse.” An evening of swirling, immersive music, it was brand new and thrilling.
In early 2018, longtime Minnesota Public Radio host Michael Barone heard a new recording by another young British musician. Kit Downes is an award-winning jazz pianist with his own trio and dozens of recordings. But he chose to make his first solo album for the influential German label ECM on three different pipe organs, each with its own distinct character.
The music on “Obsidian” is a mix of his own compositions and improvisations, a haunting version of the Scottish ballad “Black Is the Colour” and a song co-written with his father. It’s lyrical and emotional, full of unexpected sounds, dynamics and colors. One reviewer called the album “a richly layered, moving soundscape with dark, whispering undercurrents.”

“Obsidian” caught Barone’s ear.
“I’m always curious about the many ways in which the organ can express itself outside of what we think of as its norms — the traditions of use in the church and the virtuosic concert hall,” said the veteran broadcaster, whose program “Pipedreams,” distributed by MPR affiliate American Public Media, is the only national weekly radio show devoted to the pipe organ.
“Kit’s album utilizes the organ in a subtle and expressive way, which I found quite refreshing and very intriguing and attractive.” (Read some of Barone's other picks here.)
In April 2018, Barone featured selections from “Obsidian” on “Pipedreams.” He learned that Downes was planning a North American tour for summer 2019 and hoped to play a date in Minnesota. Barone modestly says, “I made that happen.”
Downes will make his Minnesota debut June 30 at St. Olaf Catholic Churchin downtown Minneapolis. More of his music was recently heard on “Pipedreams.”
Meeting Pärt as a choirboy
Downes played organ before he played piano. But first he was a choirboy at Norwich Cathedral in Norfolk, one of the great medieval cathedrals of England. He sang everything from Palestrina to Arvo Pärt.
He was 9 when he met the minimalist Pärt, who was writing a piece for the choir. “It was amazing,” Downes said by phone from London. “I enjoyed the reflective quality of the music. It stayed with me.”
He started taking organ lessons and playing church services, improvising on psalms and hymns. When he was 13, his mother gave him an Oscar Peterson CD.
“She realized that I was interested in the process of improvising,” Downes said. “She thought that jazz would be a natural kind of next step. And once I got into that, I completely forgot about the organ for a long time, because when you catch the jazz bug you go pretty deep into it. So that was that for about 15 years.”
“Obsidian” isn’t a jazz recording, but Downes credits jazz with his understanding of rhythm and harmonics.
“Jazz was the music I learned everything through,” he said. “I still say that about all the music I’m playing now. It all comes through the very broad prism of jazz music. Even if aesthetically it sounds completely different, it still owes much of its DNA to the records I listened to in my teens: American jazz.”
He credits British saxophonist Tom Challenger with bringing him back to the organ. (Challenger appears on one of the tracks on “Obsidian.”)
“I was getting to a point in my playing where I felt like I needed to make a more original statement,” Downes said. “I started thinking about playing the pipe organ, which for me wasn’t something new. It would be something old because it was what I played first, when I was a kid.”
He and Challenger played a couple of concerts together, with Downes improvising on the organ.
“When we started working like that, I found that all the things I’d learned since playing the organ as a kid, all the things I’ve learned through jazz and through contemporary classical music, sat in a really interesting way on the organ … It felt very freeing and liberating to play an instrument that was so colorful and had such a huge dynamic range compared to the piano.”
A new wave of experimenters
Downes calls the organ “a big toy box full of sounds.” One of the musicians he took inspiration from was pianist and Golden Valley native Craig Taborn.
“I was 25 when I first heard him with [American saxophonist] Tim Berne’s band, and that changed many things for me musically. His solo record, ‘Avenging Angel,’ had a big influence on how I wanted some of this organ music to sound.”
As Downes traveled and toured with “Obsidian,” he met “some really interesting organists who are doing really fascinating stuff as well. You don’t hear experimental music on the organ in the mainstream that often, so it’s a nice surprise when you find it.”
He offered a few examples. “There’s a guy called Jürgen Essl in Stuttgart who teaches improvisation. It’s not jazz, but that kind of sensibility in terms of modern harmony and use of the instrument. And Daniel Stickan near Hamburg. And Claire Singer at the Union Chapel in London. She uses the organ in completely different ways — like a noise instrument. Drone noise. She has abstracted the instrument, and that’s super inspiring. So there are people doing really cool things with it. I get very inspired by hearing a lot of that.”
When asked “Do you think it’s possible to make the pipe organ cool again?” Downes laughed.
“I’m not sure it was ever cool,” he said. “But it’s really cool to me … [The pipe organ] has become more of a museum piece. But because it has such a heavy history, it’s ripe for being abstracted and subverted, if you don’t mind the risk of it not working out sometimes, taste-wise or technically. I think that’s the appeal and allure of it: Something new through something old.”
Barone put it this way: “The Greek root for ‘organ’ simply means ‘tool.’ This is a device which — as John Zorn and Kit Downes and Henry Martin and Olivier Messiaen and Johann Sebastian Bach have proved — can be used in any number of ways. It’s really for us to say ‘Wow, let’s see what’s next around the corner.’ … The organ can do anything you ask of it.” 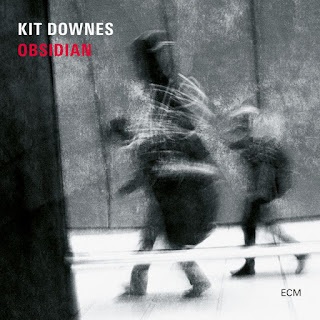 Posted by Pamela Espeland at 12:26 PM