Ahmad Jamal: Live at the Dakota 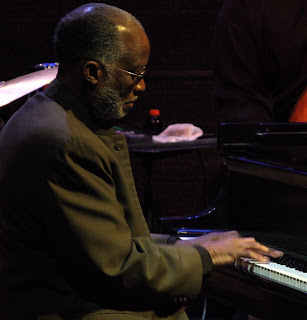 It’s rare to see a jazz artist and his or her band perform several nights in a row, at least in Minneapolis. Most out-of-towners come in for one night, maybe two, and those who live here play around town in different configurations. Provided the artist doesn’t repeat the same sets every night with the identical patter in between (some do), even a brief artist-in-residency is a chance for the audience to settle in and really listen.

We were able to attend the late sets on all three nights of Jamal’s most recent stay at the Dakota. We’d seen him several times before but never three nights in a row. He didn’t play the same sets, although he did play some of the same songs (not in the same way), and he’s not much of a talker; he might announce the first three or four tunes, call attention to one or more from his latest CD, It’s Magic, then not say another word for the rest of the set. It’s all about the music, and if you’re smart you sit quietly and open your ears as wide as you can. 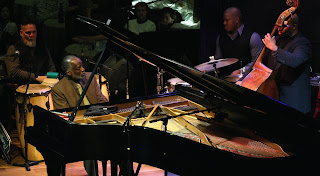 You can’t compare Jamal to anyone else because he’s not like anyone else, so if you’ve never heard him, all I can suggest is that you buy a CD or two or ten. He is an absolute master of dynamics. Within the same tune, he combines great delicacy with thunder. He makes the Steinway whisper and roar. He uses the whole keyboard and plays more high notes than anyone I know. Single notes of enormous import, big fat chords, and glittering glissandos pour out of the piano. Rhythms pile up in translucent layers. Melodies surface and combine. Spaces open and close. 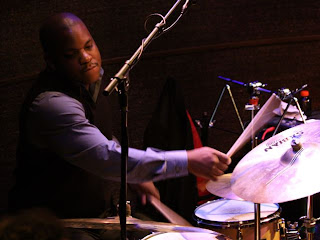 It’s transfixing to hear and see it all happen in front of you. He signals to the other members of his ensemble like an orchestra conductor, with a lift of the hand, a gesture, a wave. He beckons and points. He sometimes rises for applause, then starts playing again before he is seated. The other musicians watch him like hawks. They barely blink. Cammack explains later that there isn’t a set list and they never know in advance what they will play on a particular evening. They have to know everything and be prepared. Then, he says, “We just react.” 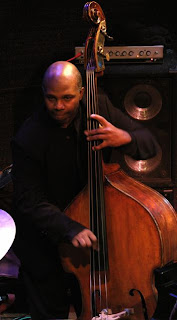 Here is some of what we heard over three nights—a combination of originals and standards, chosen who knows how from a lifetime of possibilities. This list is by no means complete and, in fact, is pretty pitiful; if a song doesn’t have lyrics, I may recognize the tune but usually don’t know the name. So this is the best I can do.

And “Poinciana,” of course. Jamal ended every late set with this, a runaway hit when he first recorded it in 1958 and still fresh and lovely after 50 years. I think if he didn't play it the audience might riot.

Badrena added much to the overall sound, and it was fun to watch him move from instrument to instrument—shaking this, ringing or tapping that, playing the mighty congas. A Latin percussion array is a candy store. 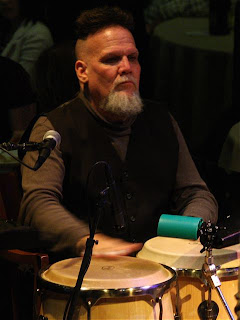 So many high points. The effervescent “Poinciana” and grand “Swahililand” with its opening proclamation. The gradual emergence of "Someone to Watch Over Me" and "My Romance" from sparkling showers of notes. Randy Weston's lilting "High Fly" (a special thank-you for that one, Mr. Jamal). As I heard “My Romance,” I thought: This song is a field of flowers.

Photos by John Whiting.
Posted by Pamela Espeland at 5:37 PM