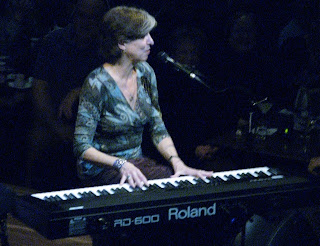 On the first real winter night of 2008, as snow falls and the temperature plummets and icy winds blow the Holidizzle parade down Nicollet Mall, Marcia Ball brings some New Orleans heat to the Dakota. She and her band give us 90 minutes of bluesy, rollicking, good-times music and touching songs including “Louisiana” (“six feet of water in Evangeline….”). Heads nod all around. It’s an open-curtain crowd, what looks like a full house, mostly people I haven’t seen here before—not the jazz audience.

We hear several tunes from her latest CD, Peace, Love & BBQ: the title track, “Married Life,” “Falling Back in Love with You” (“squeezing tight, kissing slow, Ray Charles on the stereo…”), “Party Town,” “Where Do You Go.” Also songs from the Marcia Ball catalog: “Red Beans,” “Down the Road,” the boogie-woogie rouser “Crawfishin’.”

She has a voice like a male blues shouter; nothing fancy but it gets the job done. She can whistle through her teeth. The Dakota’s Yamaha grand has been pushed to the back of the stage and she’s playing a Roland at the front. Wonder why? To be nearer the audience? She fits her long tall self behind the keyboard and plays like she means it.

Her banter is easy and warm. In brief bursts between songs she tells us how certain tunes came to be, and about her hometown on the Texas/Louisiana border (“on the easy-drinking side, the ‘Loose-iana’ side; on Saturday night all the Baptists would come and act like Catholics”). She explains that before Peace, Love & BBQ there was a time when she couldn’t write: “I was kind of angry. Then my friend Tracy Nelson sent me a song about homelessness and poverty [‘Where Do You Go’] and once I did that I could write my silly stuff.” She says she and her band never used to come north in the winter and “now I know what snow tires are for.” She’s been watching Holidizzle pass (she can catch glimpses through the windows onto the mall) and notes she has never seen a parade go by so fast. She thinks we’re crazy for having parades in the winter. 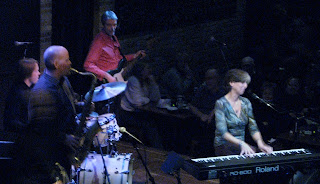 The set officially ends with the delightful “I Want to Play with Your Poodle,” they exit, and Ball returns for a powerful solo encore: “Ride It Out,” the tale of a house in Mississippi that was carried away by Katrina’s flooding and survived intact. Then the band reconvenes for “I Wish You Well,” one of the best end-the-set, say-goodbye tunes ever written, a sweet benediction: “I wish you sunshine, flowers, and smiles/I wish you ribbons tied up in your hair.”

Apologies for the pitiful photos (which are not by John Whiting).
Posted by Pamela Espeland at 7:00 AM