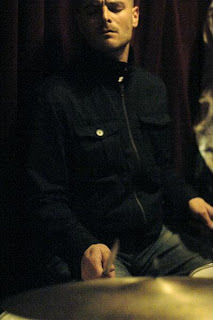 It’s rare (for me) to open a new CD by an artist I don’t know, pop it in the player, and leave it in for most of the day, backing up to hear tunes over again, not wanting to skip anything. I did that with Dan Aran’s Breathing, one of the most beautiful recordings I have heard in a long time.

Who’s Dan Aran? A New-York-via-Jerusalem drummer, one of that fascinating crowd of serious, well-educated, grown-up Israeli musicians who have moved to NYC in recent years. (Read more about that here.) Born in 1977, a drummer since 11, educated at the Rubin Academy of Music high school in Jerusalem and the New School University in NYC (from which he graduated in 2004 with a BFA in performance), he has played with bassists Avishai Cohen and Omer Avital, jazz vocalist Stacey Kent, pop singer Natalie Merchant, and many others. He seems to divide his time between NYC and Israel; I don’t believe he has made it to the Midwest yet, unlike Avital and Cohen, guitarist Gilad Hekselman, pianist Omer Klein, and trombonist Avishai Lubovitch. (Note to all JCCs and synagogues who bring Israeli jazz musicians to Minneapolis/St. Paul: Put me on your mailing list and I’ll show up.)

Breathing is Aran’s first CD as leader, just out on Smalls Records, which Chris Kelsey reports is “surviving, but just barely.” Smalls, the NYC jazz club in the West Village with which the label is associated, has been a home-away-from-home for many Israeli musicians.

Ah, the tracks. Four out of ten are originals by Aran, including the opener, “Sun Bath,” which begins with a gentle summons by Cohen’s trumpet, layers on instruments (soft piano, plashy cymbals, bass, trombone, guitar), builds in intensity, digresses into a conversation between trumpet and trombone, then pauses, takes a breath, and moves into a ruminative piano-bass-guitar section that picks up speed (but not much) when Aran and the rest return. Another crescendo, another diminuendo, another digression, this time into big, chordy guitar. I’m never sure where this piece is going but it pulls me along. It’s more of a sunrise than a sun bath, changing colors moment by moment.

“Sun Bath” gives way to “Shnozel,” an odd name for a slow, measured work of real beauty that sounds at first as if it might turn into “Moanin’.” The spotlight is on Hirahara’s piano.

“I’m So Blue” shifts the mood to saucy and swinging. Degibri’s tenor sax takes the lead on this tune I know I've heard before--by someone named Lawrence?--but can't find anything about. (If you know this music, please comment.) By now I’m completely won over by pianist Hirahara. Aran takes his first notable solos and I’m reminded that this is his CD as leader. Throughout, he seldom asserts himself; this is a group effort. [Note: Dan Aran wrote to tell me that "I'm So Blue" was written by his former teacher at the New School, Arnie Lawrence.]

“Riva,” an Aran original with a Middle Eastern flavor, features Degibri on soprano sax, who turns it over to Hirahara et al. midway and comes back to bring it home. Nice. “Para Ezequiel” by bassist Ronen is tuneful and lovely, Aran’s drums laying down a sweet Latin groove for Hirahara’s piano to dance on, and later Ronen’s bass in a moody solo. And here—five tunes into the ten on this CD—is where I know this is music I will likely play again and again. I won’t insult Aran and his bandmates by calling it “easy listening,” but it’s oh so easy to listen to.

(Meanwhile, my husband has wandered into my office twice to say "What's that?" "Who's that?" and "I like that.")

Ornette Coleman’s “The Blessing” comes as a surprise, simply because I didn’t expect to hear it in this particular mix. Any rough edges and occasional squawks from the pretty-tame-for-Coleman original on Something Else!!!! have been polished out, leaving the melody in the hands of Cohen and Voltzok—no sax on this track. The tempo is slower, more deliberate, giving the tune more space. (This version is also twice as long as Coleman’s.)

Cole Porter’s “I Concentrate on You” (which more jazz artists seem to be playing these days) is a showcase for Gili Sharett’s bassoon, which I would have liked to hear more of. You could (and should) slow-dance to this tune, at home on a Friday night, with the kids in bed and a candle or two flickering and the phone turned off and cocktails sweating on the coffee table…. Excuse me. Where was I?

Jack Lawrence and Walter Gross’ “Tenderly” begins with Brewer plucking the melody on his bass. Brewer leads on most of the 7-plus-minutes track, which resolves into a riff that cushions a playful extended solo by Aran.

“Gul Lihibib” is probably Breathing’s farthest-out track, the most exotic-sounding and least straight-ahead. I wasn't able to learn anything about this tune or its composer, someone named Amram—perhaps David Amram? Comment if you know more. This is the only track to feature Uri Sharlin, who plays both piano and accordion above Aran’s deep, driving percussion. [Note: Dan Aran wrote to tell me that "Gul Lihibib" was written by Israeli composer Aharon Amram.]

In closing: Aran’s “Yemini Pne.” At the start, a loose and lazy meditation. More nice work by Cohen/Voltzok and Hirahara/Brewer. A brief, exploratory solo piano transition into a lively second half and a spirited back-and-forth between the horns. Bright calls from the trumpet, closing thrums and rumbles from the bass and drums, a final exhalation from the trumpet, and it’s time to start over at track 1.

Let's hope that Smalls Records doesn't die, that Breathing gets air play, that Aran ventures west of the Hudson before too long, that good things happen for this deserving new release. It's a CD many people will enjoy if they have the chance to hear it.

Posted by Pamela Espeland at 12:04 PM