George Cartwright: From Ponderosa to PonyCat 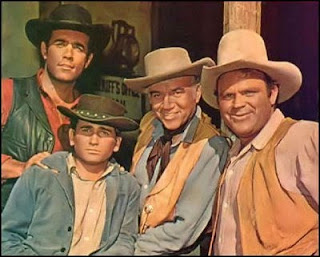 A product of a Jerome Foundation Composers Commissioning Grant and several prodigious and unfettered imaginations, “Bonanza: The Musical” made its debut at Studio Z on Friday, January 22.

It’s “Bonanza” in a general characters-and-context sort of way, and a musical because it has music. No dancing, singing, costumes or sets, thank goodness.

“Bonanza: The Musical” is a radio play written by Davey Williams, an improvising musician/guitarist/writer/painter and longtime member of Curlew, the experimental/free jazz group founded by composer/saxophonist/bandleader George Cartwright in 1979.

Cartwright received a Jerome to write music to Williams’ play. He had two versions of the play to work with, one read by Williams into Cartwright’s answering machine (thin, gritty, sometimes indistinct) and another recorded in a studio, also by Williams. Cartwright took both recordings and synced them in his computer. Sometimes you hear the voices together, sometimes apart, like a phrase and an echo, or an echo followed by a phrase.

The play is absurd (in the big, philosophical, pointless-universe sense of the word). Here’s Cartwright’s description from the program:

So the Cartwright Boys are throwing the Marlboro Man and his Boy a going away party since no one smokes anymore, much. Arguments go on, food is cooked, songs are sung sort of, merriment, fisticuffs and reveling enlightenments are the course of the party.

Before the play began, Williams acknowledged Cartwright as “my bandleader for 20 years.” Then he said, “This is going to be a kicking ass night.”

The reading was accompanied by live and recorded music composed by Cartwright, performed by Williams, guitarist Andrew Broder, and bassist Adam Linz (via recording; Linz had to be elsewhere on both nights). The music included bits of score that the musicians could choose to play or not. 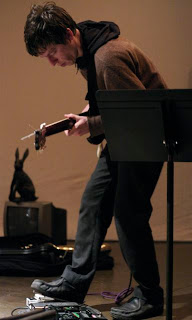 Behind the musicians, projected on a curved fabric screen, were flickering black-and-white films by Cartwright’s wife, artist Anne Elias. Flames and feet and fabric, landscapes, grass, shadowy figures. Also on the “stage” (simply the front of the room, not raised) was a small television set (not on a stand, just on the floor) with a sculpture of a rabbit on top.

That rabbit—upright ears, thin little body, and hyper-alert stance—was the essence of anxiety. It served as a constant reminder that things were not as cheery as they might seem, but more about (to quote Cartwright, from the program) “the stinking play of man on lesser man, murder on a large and small scale and general reaction to MEANness.”

For much of the time, the TV showed a single still image—train tracks in a field, maybe a house. At some point the still image was replaced by images going somewhere fast.

I listened to the reading, observed the musicians, watched the films, and noticed a plate of grapes (green and red) on a table that also held cheese, crackers, and wine. I thought about the grapes and made plans to score some during the break.

It was a happening (she writes, hoping that word is not considered stale or offensive these days). Everyone there, probably 25–30 people, seemed to enjoy it. I did. Parts of it made me laugh, like the discussion between Hoss and Hop Sing about which Star Trek was better, the original series or The Next Generation. Parts of it were puzzling or unintelligible. I probably focused too much on the words at the expense of the music, but I remember Williams working his whammy bar and Broder working his foot pedal. The music was like weather, changeable and unpredictable. 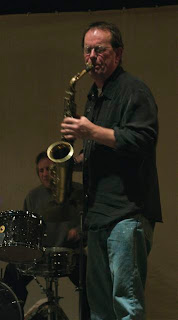 Following the break and the grapes: songs, tunes, and improvisations by GloryLand PonyCat, a group I’ve heard before and like a lot. Tonight it was Cartwright on saxophones, Broder on guitar, Alden Ikeda on drums, and Josh Granowski on upright bass.

Before the music started, Williams promised to do his best to destroy it, then said, “Don’t worry—it’s going to be a lovely gig.”

It was. Midway through the second tune, which started out small and slow, then grew to fill the room, Cartwright invited Williams up and all hell broke loose. Williams played his guitar with his hands, scraped it along the edge of a metal music stand, banged it on a bentwood chair (after which he tossed the chair). Broder and Williams each seemed to be doing his own thing but you knew that in a parallel universe they were mano-a-mano. Cartwright led the way with his big, muscular sax, Granowski planted the rhythmic pylons, Ikeda sprayed the room with buckshot, and Williams windmilled his right arm like Pete Townshend. It was glorious. 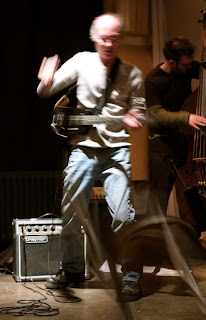 If there had been a film, it might have been herds of rhinos charging, or scenes from the Transformers movie: Optimus Prime rising.

More about “Bonanza: The Musical”: Click on the sound file under “Text” to hear pieces of Cartwright’s conflation of Williams’ answering machine and studio recordings. Click on any word under “Film and Video” to see a clip by Anne Elias. Click on the sound files under “Music One” and “Music Two” to hear selections from the music. Under “Music Three,” click on any word to see a bit of Cartwright’s handwritten score.

Free Curlew music. Download 14 live performances from the early and late 1990s.
Posted by Pamela Espeland at 9:54 AM