A night of new music at MacPhail: The Bryan Nichols Trio and the Paul Renz Quintet

When: Saturday, January 23, 2010 • Where: Antonello Hall, MacPhail Center for Music • What: MacPhail’s Spotlight Series, featuring members of its teaching faculty; this was “Jazz Innovations” night 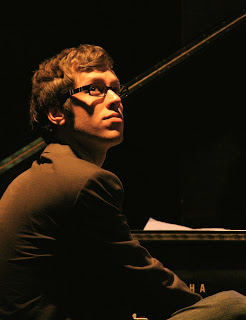 When pianist/composer Bryan Nichols told me that his upcoming performance at MacPhail would consist of all-new music written the week before and rehearsed only once, I was more excited than skeptical. I’ve heard Nichols and the other members of his trio—Adam Linz on bass, JT Bates on drums—often enough that I know to trust them. Pretty much anything they do is interesting, much of it deeply interesting, whether they’re playing ensemble or taking solos.

I expected to like the music; I loved the music. Five selections, the first four untitled. “Song 1” was a perfect opener, a warm and welcoming piece in which Linz literally leaped into his first solo, playing a rapid series of low-to-high notes on his bass and rising to his toes. Not an in-your-face piece, but an invitation to sit back and enjoy.

“Song 2” began with mallets on drums, a solo that went from soft booms to sticks on rims and a moment during which JT seemed to be squeezing the snare drum head. This one was freer, edgier, wilder. More like what I originally expected, though “Song 1” had already taught me the futility of prediction. We were in for more surprises.

“Song 3” started with Nichols playing what sounded like a very old tune, something Bill Carrothers might play. Sweet and nostalgic, it took a sharp left into swing, with Linz walking the bass. Fierce drumming by JT brought it up to the present and kicked it into the future.

“Song 4” was the most traditionally structured piano-trio tune: Linz and Bates playing rhythm, Nichols chording with his left hand and exploring the keys with his right. Enjoyable hard bop, with band members trading eights.

The fifth and final selection had a title, “Stories about Stories,” which Nichols explained was inspired by the tales jazz musicians enjoy telling. A tune in the once crazy, now lilting 5/4 rhythm (thanks, Lisa Meyer, for pointing that out). Moody, lovely, and reflective, like the big floor-to-ceiling windows in front of which the band was playing. The curtain was open for this event, revealing the glories of the Antonello’s glass.

Throughout the set, the music was intriguing, engaging, sure-footed, and pleasing to a large crowd that included families with children.

Aside: Bryan Nichols on playing with Fat Kid Wednesdays

Nichols’ new groups feature members of Fat Kid Wednesdays (his quartet includes all three—Linz, Bates, and saxophonist Michael Lewis) but none of them sounds like Fat-Kids-plus-piano. Like The Bad Plus, Fat Kids is not a group whose members are interchangeable. It’s a unit, one piece, and formidable.

Here’s what Nichols said recently about this trio and his quartet:

“JT and Adam and I love playing trio, but that’s never been something we have pursued intensely. It just happens every now and then, and we really enjoy it. It’s been happening since I was 17. It’s a really fun group….

“The quartet right now will be 95 percent my songs. That’s one of the biggest differences between that and Fat Kids itself. They have a couple of originals, but for the most part they’re not a band that’s deeply concerned with playing original music. Which I totally dig, because the way they deconstruct standards or free tunes or whatever is amazing. They take stuff and make it their own in a cool way. But if I went and decided to do that same mix…. That’s not what I want to do. I don’t want to just hire them and then copy exactly what they do. I don’t want to insert myself into Fat Kid Wednesdays.”

I mentioned that I had been at the quartet’s debut in late December at the Dakota and remembered thinking how tough it would be to make a dent in Fat Kids. Nichols laughed and said, “They’re guys I play with all the time, guys I’ve grown up both listening to and playing with…. I’ve been talking about putting together a regular group for quite a while now. I’ve been back in town for four years, doing various pick-up groups, because one of the things about here I really like is I can play with a ton of different people. It’s tough to limit myself [to hiring certain people and not others]. There are all these great players. This town is a special town. For a place its size, it’s impressive….

“The fun thing about playing with [Lewis, Linz, and Bates] is not only do they have this deep connection to all the music I do, not only do they have the same reference points as far as growing up in a similar place and playing a lot of different music, but they all obviously have huge ears, they’re great listeners, they have a ton of energy, so I can take anything and bring it in there and it’s given a new life. Most of the material we’re playing is new anyway, but it becomes extra new….

“Those guys have a really intense and idiosyncratic and impressive thing themselves, and I love it, but just because I know them so well personally and musically, I don’t want to feel intimidated by them. And on one level I do, because they’re my favorite band to listen to. If I have to pick a jazz group in town to listen to, it’s them and Happy Apple, obviously. On that level, I’m impressed and intimidated constantly by what they can do, and the interaction, but on a level of ‘Can I play with them?’ the answer is ‘Absolutely.’” 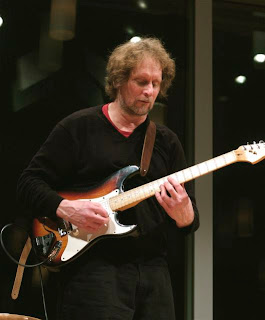 The music Renz and his quintet played was not quite as new as Nichols’; all of the tunes were released a few months ago on Renz’ latest CD, In My Own Hands. All were written by Renz. I like the CD very much but hadn’t listened to it since December, when I included it in a list of holiday gift possibilities.

It was good to hear several of the tunes played live, with more room for the individual artists to stretch out—on the loose and funky “Take It Home,” for example. I enjoyed seeing Graham and Schwandt play, though I kept imagining Schwandt sharing the stage with Brandon Wozniak, another tall saxophonist (they could do it, too, now that Wozniak has switched from tenor to alto, at least when playing with the Atlantis Quartet). But while Renz’s guitar and Graham’s fretless electric bass were amped, Ziemniak was on his own with acoustic piano. The Antonello’s gorgeous Steinway couldn’t stand up to the amps. Much of the piano was lost—even where we were sitting, in the center of the front row. Ditto for Fryett's drumming. Schwandt usually played toward the front of the stage, near a mic, so we heard his saxophone clearly (but later learned that people seated further back weren't so lucky). The acoustics in Antonello can be pristine, but when some instruments are amped and others aren't, they need a little help.

Photos by John Whiting
Posted by Pamela Espeland at 1:58 PM