Are you in your car or near a radio at 8:30 CST on Friday mornings? Tune to KBEM to hear me and Mr. Jones—Jazz 88 "Morning Show" host Ed Jones—talk about these events and more. 88.5 FM in the Twin Cities, streaming live on the Web. Note: This Friday (Feb. 18), the lovely Maryann Sullivan, host of KBEM’s “Corner Jazz,” will sit in for Ed.
It’s not a big week in terms of national jazz acts coming through (with one exception), but it’s a good week in terms of area artists (and an expat) offering variety and excellence—in other words, business as usual for our jazz-rich towns. Think of this as a good time to explore some venues that may be new to you and won’t cost you a bundle.
Friday: Erik Fratzke, Carnage, Nathan Hanson, and Brian Roessler at the Black Dog
What was once called the “Fantastic Fridays” music series at the Black Dog is now “Community Pool: Deep End” to distinguish it from Fantastic Merlins, the jazz group. But it’s still curated by the wide-eared Nathan Hanson and features some of the cities’ most interesting musicians. Tonight, the core duo of Hanson on saxophones and Roessler on acoustic bass will be joined by two friends: the mighty Eric Fratzke on electric guitar and bass, and emcee/beatboxer/hip-hop artist/rapper Carnage the Executioner. Carnage’s solo debut CD, Worth the Wait, is just out (he celebrated with a release party last night at the Cabooze). Listen here.
8-ish p.m. Friday, Feb. 18, Black Dog (corner of 4th and Broadway in St. Paul's Lowertown). No cover, but honor the tip jar. 651-228-9274.

Friday: Todd Clouser’s A Love Electric at the Red Stag
Guitarist/composer Clouser is livin’ the dream. Last year he dug into his own pockets to make his latest CD, A Love Electric. It has now been picked up by the Ropeadope label, whose artists list also includes the Dirty Dozen Brass Band, DJ Logic, and Medeski, Martin and Wood. It's a perfectly legitimate excuse to celebrate a second CD release (the first was at the Dakota in September). This time he’ll be at the Red Stag with Bryan Nichols on keys, Adam Meckler on trumpet, Chris Bates on bass, and Greg Schutte on drums. Let’s also mention that Minneapolis native Clouser now resides in warm Baja, Mexico, and that yesterday was his birthday. Listen to selections from the CD on his website (click Music/Video).
9 p.m. Friday, Feb. 18, Red Stag Supper Club in Nordeast 612-767-7766. No cover.
Sunday: Laura Caviani and Friends: The Music of Alec Wilder at the Black Box in Bloomington
Thoughtful and elegant pianist/composer Caviani recently rediscovered the music of American composer Alec Wilder (1907–80). She loves both jazz and classical music, and the two combine in Wilder's compositions, so a concert was inevitable. Hear Caviani interviewed by John Birge, classical music host for MPR, with examples of the music she will play.
The program will include a horn sonata, art-song arrangements of Wilder tunes, and a jazz-oriented set with a focus on improvisation. Caviani will share the stage with Gordy Johnson on bass, Phil Hey on drums, and Gwen Anderson on French horn.
2 p.m. Sunday, Feb. 20, Black Box Theater, Bloomington Center for the Arts on Old Shakopee Rd. $22 adults, $19 seniors and students. 952-563-8575.
Tuesday: Bill Frisell and Vinicius Cantuaria at the Cedar 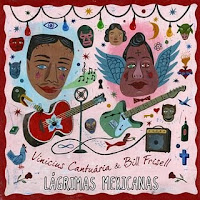 American guitarist Frisell and Brazilian guitarist Cantuaria have worked and recorded together for years. Their new CD, Lagrimas Mexicanas, a blend of traditional Latin rhythms and improvisational jazz, was released Jan. 25. Frisell plays electric and acoustic guitars; Cantuaria handles vocals, percussion, and acoustic guitar. I’m loving the new CD. Cantuaria could lure birds out of the trees with his sweet, seductive voice (that Bahian Brazilian thing; think Caetano Veloso, with whom Canturia has also worked), and the combination of these two great guitarists is not to be missed.
7:30 p.m. Thursday, Feb. 22, The Cedar on the West Bank, $35/$45. 612-338-2674.
Check the live jazz calendar at the right or here for many more events.
Posted by Pamela Espeland at 11:40 PM