How to write a media release

I see a lot of media/press releases. I skip through some and stagger through others. Many share similar flaws: Too many words. Too many adjectives. Too many exclamation points!!!! Too many errors. Bad design. Or the absence of something you really need to know, like when, where, or how much.

Writing press releases is hard. I know. I've written quite a few. It's tempting to overwrite in an attempt to persuade or sell (provided you actually like and believe in whatever it is you're writing about). It's tough to be brief and focus on the facts. And it can be almost impossible to keep everything on one page while leaving some breathing room besides.

Whoever is writing releases for Sue McLean and Associates has it down. (Kyle Heino, is that you?) Look at this. (Don't worry about reading it, just see it. Notice the glorious white space.) 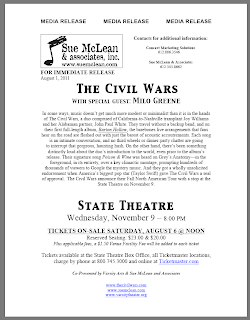 Now click on it to read the text, if you want.


It's both an announcement and a mini-novel, complete with beginning, middle, and end, a bit of tension ("haunting hush" vs. "loud"), even a crescendo of excitement ("in the foreground, in its entirety, over a key climactic montage"). I've learned what I need to know and then some. (Except I don't know who Milo Greene is, which doesn't really matter at this stage.)
Here's how others might have handled this:
The Civil Wars
With special guest: Milo Greene
Pop phenom and multiple Grammy(R) winner TAYLOR SWIFT loves them!!!!
Heard on the hit TV series Grey's Anatomy!!!!
Blah blah blabbidy blab....
There's something to be said for writing well enough that one can save the juicy celebrity stuff for the end. And it's especially nice when the end isn't that far away from the beginning. Word count: about 180.
This modest and minimalist style wouldn't work for every event. I like to read a press quote once in a while, when good ones exist. But this is such a welcome change from the usual overblown, overexcited, overlong release that I wanted to raise a little flag, and wave it.
Posted by Pamela Espeland at 12:26 PM