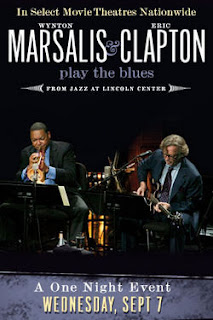 Wynton Marsalis and Eric Clapton Play the Blues was shown in theaters across the country just once, shortly before it was released on DVD. (A CD soundtrack is also available.) It’s what a concert film should be: up close and personal with the musicians on stage, beautifully filmed, great sound, and no silly panning of adoring audience members.
Filmed during live performances in the Rose Theater at Jazz at Lincoln Center, the film features Marsalis and Clapton (who have been friends for years) and six members of the Jazz at Lincoln Center Orchestra: Dan Nimmer (piano), Carlos Henriquez (bass), Ali Jackson (drums), Marcus Printup (trumpet), Victor Goines (clarinet), Chris Crenshaw (trombone and vocals). Also on stage: New Orleans banjo master Don Vappie, Clapton’s keyboardist Chris Stainton, and (later) special guest Taj Mahal.
Marsalis explains the instrumentation in the liner notes: “We combined the sound of an early blues jump-band with the sound of New Orleans jazz to accommodate the integration of guitar/trumpet lead and to give us the latitude to play different grooves…. We decided to use the instrumentation of King Oliver’s Creole Jazz Band plus two (electric guitar and piano) because they transformed the world of music with a set of 1923 recordings and, with performances like ‘Dipper Mouth Blues,’ forever established the blues as a centerpiece of jazz.”

These were highly anticipated, big-deal, sold-out concerts, but the film feels like a relaxed and easy evening on someone’s porch, except everyone is wearing a suit. The setlist—songs chosen by Clapton and arranged by Marsalis—includes Louis Armstrong’s “Ice Cream,” “Careless Love,” “Joe Turner’s Blues,” and a smoldering “Layla” that opens like a NOLA-style funeral march. (It was Henriquez who suggested “Layla.") The whole set is infused with Crescent City sound and swing. It swings hard. How could it not, with these players? Taj Mahal, a mountain of a man, comes out near the end for a soul-stirring “Just a Closer Walk with Thee” and his signature song, “Corrine, Corrina.”
Even with two superstars front and center (between them, Marsalis and Clapton have won 29 Grammys), this is a group effort. Everyone solos, everyone shines. Goines’ soaring, dancing clarinet is especially delicious. The cameras bring us near enough to see the nods and smiles of appreciation among the musicians, to hear the occasional “Yeah!” and laughter. They’re having a good time, and so are we.  It’s a bonus to be able to follow Clapton’s fingers on the strings and the horn players’ on the keys, to look over Nimmer’s shoulder and stand before Henriquez’ bass.
There are occasional moments of rehearsal footage, and a few words from Marsalis, but Wynton Marsalis and Eric Clapton Play the Blues is mostly about the music: traditional, still vital and wide open to interpretation.
Related:
Marsalis’s liner notes and audio previews of each track.
The music is available on Spotify.
Clapton’s YouTube channel has video clips. One catches Chris Crenshaw in rehearsal, wearing his Hats for Cats hat. 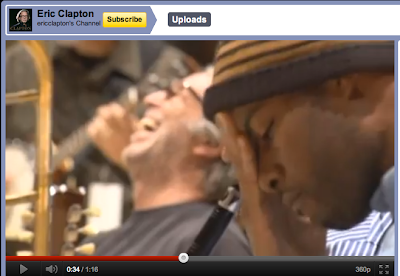 Posted by Pamela Espeland at 11:22 AM