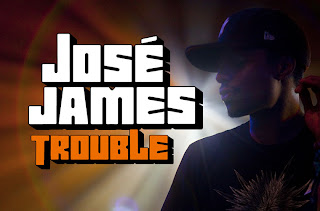 Jazz fans in the Twin Cities feel kind of proprietary about José James. He's our homie. He grew up here, went to school here (DeLaSalle, South High), had his life turned around by a teacher here (Denny Malmberg), started performing here (at Fireside Pizza with Malmberg), prepared here for 2004 Thelonious Monk competition (which he didn't win), and leaped from our fertile, springy ground into the wide world. Today he's a star on the international scene, as versed in hip-hop and R&B as he is in jazz. His Facebook fans keep up with his dizzying schedule: gigs with Robert Glasper and Taylor McFerrin, tours of Europe and China with McCoy Tyner, guest performances with Wynton Marsalis and the Jazz at Lincoln Center Orchestra (a Billy Strayhorn tribute), reviews in multiple languages from cities where he has performed. He's a comet streaking across the sky.

This just in from NYC music marketer Giant Step:

José James has released his new single, "Trouble," from the forthcoming 2012 album No Beginning, No End. From the world of Jazz where he is surrounded by the genre's most respected players and into the realm of R&B and soul, José provides listeners with an intimate and inspiring sound.
José explains, "'Trouble' is the story of a man trying to love a woman, his world and himself. My hope is that it inspires people to keep strong and enjoy the beauty of their own lives. I wrote it with Marvin 'Trouble Man' Gaye in mind - he's my favorite singer and inspires a lot of my music. A lot of his songs were inspired by jazz and he sang with so much passion and truth. I wanted to sing something that showed a more playful and sensual side to my singing, something with a killer horn section and a sexy bassline. I'm blessed to have Pino Palladino lay down that groove!"
Los Angeles' KCRW premiered the track this month after several of the station's DJs placed his previous album, Black Magic, in their 2010 top 10 lists and Music Director Jason Bentley ranked José's live performance on Morning Becomes Eclectic among his top 10 of the year.
"Trouble" gets a remix courtesy of underground hip-hop artist/producer Oh No. "I was also inspired by Madlib's beats - everything fits but somehow feels off at the same time and sometimes life is like that," says José. "His brother, Oh No, did the remix and really brought out the darkness and the beauty of the struggle to do right."
José performs at the CMJ Future Now Showcase alongside Taylor McFerrin and The Robert Glasper Experiment in New York City before heading overseas with McCoy Tyner.


Listen to "Trouble" on SoundCloud
Read my 2010 interview with James
While you're on SoundCloud, view all and check out James's version of "Lush Life" with Belgian pianist Jef Neve. Killer.
Posted by Pamela Espeland at 8:58 AM