A star in Europe, José James heads home on tour 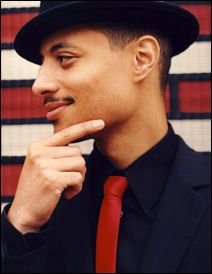 Some people in the Twin Cities may remember José James as a slight, soft-spoken student at DeLaSalle and South High. Others may recall his Monday night performances at Fireside Pizza in Richfield with pianist Denny Malmberg. Most probably don’t know that in Europe, 31-year-old James is a sensation. Now based in London, he has released three CDs, performed in dozens of countries, and played to crowds numbering in the thousands.

James is currently on tour with his latest release, a collaboration with acclaimed Belgian pianist Jef Neve. “For All We Know” is a collection of jazz standards — “Body and Soul,” “Embraceable You,” “Tenderly,” “Lush Life” — in spare, intimate arrangements, as if James and Neve had come into your living room (bringing a 9-foot Steinway grand) and given a concert just for you. They will be at the Dakota this Thursday for one night only.

The story of “For All We Know” is a blend of fairytale and kismet. James is not strictly a jazz singer, though his roots are in jazz; he performed around town in his teens, studied jazz at New York’s New School with Junior Mance and Chico Hamilton, and took part in the prestigious Thelonious Monk and London Jazz competitions. (He won neither but was a finalist for the Monk, where his performance made judge Dee Dee Bridgewater cool her face with a fan.) While in London, he handed a demo to DJ and producer Gilles Peterson, who owns the Brownswood label.

That was his second big break. (We’ll get to his first in a minute.) “Gilles Peterson put me on the world stage and gave me a chance to produce my first album,” James told MinnPost earlier this week by email. He wrote his own material and included soul and hip-hop vibes. “I was heard by other folks outside of jazz, which is crucial.” Both “The Dreamer” (2008), his first recording for Brownswood, and the follow-up “Blackmagic” (2010) are more pop than jazz.

Performed together in Belgium

James met Neve in Belgium, where they performed together on a TV show and Neve filled in for James’ regular pianist at a concert in Brussels. When James suggested they make a recording, Neve booked a studio for the next day.

They played songs they love. “These are basically my favorite standards,” James said. “Songs I have a relationship with. They were my introduction to jazz. I grew up listening to the classic versions by Nat King Cole, Billie Holiday, Charlie Parker, Dexter Gordon. These are our national treasures, timeless songs from the history of our culture. They remain important.”

And here’s where the story gets really interesting. “For All We Know” is an album of mostly first takes and no overdubs, like the great jazz album “John Coltrane and Johnny Hartman,” released in 1963 and now a classic. (Kurt Elling’s interpretation, “Dedicated to You,” won the 2010 Grammy for Best Jazz Vocal Album.)

James and Neve made the recording for their ears only. Then word got out, buzz happened and Impulse! came calling — the same label that is home to “John Coltrane and Johnny Hartman.”
“For All We Know” is the first new release on Impulse! since 2004. Its most recent release up to now: Alice Coltrane’s “Translinear Light.”

What does James think of this fortuitous chain of events? “What can I say? ‘Dedicated to You’ is my favorite male vocal jazz album of all time. It was hearing John Coltrane play ‘Equinox’ when I was 17 that got me seriously into jazz singing, so he’s always had this pull on me. He is an inspiration to us all, and it’s an honor to follow Alice on the label.”

Impulse! is betting heavily on “For All We Know.” The new CD will play a major role in the label’s 50th-anniversary celebrations. The suits are hoping that it will bridge the gap between jazz and pop — like Norah Jones’ “Come Away With Me” famously did for Blue Note. Plans are in the works for a second Impulse! CD, a live recording of James’s “Facing East” project, a five-piece band (with Neve) that plays the music of John Coltrane.

Now, what was James’ first big break? Meeting music teacher Denny Malmberg at South High. “He transferred from DeLaSalle midyear,” Malmberg recalls. “The counselors put a schedule together for him, and the only place they could put him during fifth hour was my women’s choir. He sat there staring at me for two weeks.

“Then one day he came up to me and said, ‘Hey, Mr. Malmberg, have you ever heard of Nat King Cole?’ I said, ‘Of course.’ He said, ‘I do a lot of his songs.’ I said, ‘How about “Route 66”?’ I started playing it on the piano, he started singing it, and he blew me off my bench. José sang baritone-bass parts with the women’s choir for the rest of the year, and we featured him on solos.”
How did the women feel about that? “Are you kidding? They loved him.”

'I want to be a jazz singer'

James and Malmberg grew close and remain friends. When James moved back to Minneapolis after several disappointing years in New York (“He was so young; it was very difficult,” Malmberg says), he went to his former teacher and announced, “I want to be a jazz singer.” They performed together on Monday nights at Fireside Pizza for just over a year.

Malmberg helped James create his audition tape for the 2004 Monk competition. James didn’t win (another young singer named Gretchen Parlato did), but that hardly matters anymore. Did Malmberg know his former student would be successful? “I had no doubts about it. I had never heard a voice like that in my life.”

James has a gorgeous baritone, sultry and haunting. He’s been compared to Hartman — and to Billy Eckstine, Gil Scott-Heron, Joe Williams, and Bobby McFerrin (for the quality and resonance of his voice), Marvin Gaye (for his soulful style), D’Angelo (for sexiness), and Billie Holiday (for his ability to communicate pure emotion). I hear Andy Bey in his voluptuous, quivering vibrato.

Closing note: Malmberg had several students who went on to be fine musicians. A short list: Michael Lewis, Kevin Washington, Michael Bland (Prince’s drummer), Dan Frankowski, Adam Linz, Bryan Nichols, Betsy Barta, Bernard Scully (principal French horn for the SPCO). Some were going through very rough stretches when they met Malmberg. “I hate to think what they would be doing right now if they hadn’t found music — if that hadn’t been available to them at that time,” Malmberg says. Words to ponder for those who would cut music programs in the schools.