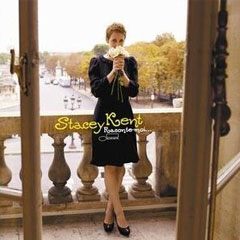 It’s been four years since Stacey Kent last performed at the Dakota — on March 14, 2006, to be precise. During that time, she released her first CD on Blue Note, the Grammy-nominated “Breakfast on the Morning Tram” (2007); was awarded the Chevalier des Arts et Lettres by France; studied Portuguese; made her second Blue Note CD, “Raconte-moi ...” (2010); and battled breast cancer. Her husband, saxophonist Jim Tomlinson, began wearing his hair like a Sumo wrestler, pulled back and tied in a knot at the back of his head.

She’s on tour for “Raconte-moi,” just released and sung entirely in French. (“Breakfast” includes two French songs; the new CD is the whole baguette). Because the first set on Monday ran long, the second started shortly after 10 p.m.

Kent’s opening song was Antonio Carlos Jobim’s widely covered “Waters of March.” He originally wrote it in both Portuguese and English; she sang it in French (“Les Eaux de Mars”). Jobim’s masterpiece is a high-wire act, basically three notes with leaps in between and tricky lyrics (a sampler, in English: “It’s a sliver of glass/It is life, it’s the sun/It is night, it is death/It’s a trap, it’s a gun. ...”). She made it sound relaxed and easy, her lovely voice twining with Tomlinson’s soprano sax.

From there, we heard a selection of songs from several recordings: the title tracks from “Breakfast on the Morning Tram” and “Raconte-moi,” two bossa novas, including Jobim’s “Corcovado” from Tomlinson’s CD “The Lyric” (2006), “Makin’ Whoopee” and “Say It Isn’t So” from “The Boy Next Door” (2003), “One for My Baby” from “Let Yourself Go” (2000), Kent’s homage to Fred Astaire. For the bossa novas, she played guitar. She sat quietly as her husband and the band played “Alfie,” Tomlinson’s tenor sax sighing with regret.

In between, she told stories, the longest about her French connection: a grandfather who taught her to recite French poetry. Kent enjoys talking with the crowd, so much that she sometimes gets trapped temporarily in a dead end of her own devising. Tonight it was something about the French having a head-heart connection, Brits not having it, and Americans being all heart.

Later she riffed on “delicious,” noting that French journalists love the word and using it to describe her band. Part of the great pleasure of seeing Kent live is the warm, romantic interplay between her and Tomlinson, married 19 years this August. Art Hirahara on piano, Gordon Johnson on bass, and Phil Hey on drums really are delicious, a perfect blend of sound and rhythm that supports Kent’s singing and Tomlinson’s playing.

Kent’s voice is sensual and sweet, with flutters like silk in a breeze. She can also swing hard, which she did on “Makin’ Whoopee” (not a happy song, despite its title). And she can fill a lyric to bursting with emotion. Irving Berlin’s “Say It Isn’t So” (“Everyone is saying you don’t love me/Say it isn’t so”) is now officially the saddest song I have ever heard.

At one point, Kent spoke of her love for bossa nova. “I’m obsessed, possessed, impassioned and engrossed,” she told the crowd. Effusive, too. Hearing her speak and sing, it’s evident how much she loves words and languages. English alone isn’t enough for her anymore.