From the Department of Better Late than Never, a review that should have been posted much earlier. It will live at the top of the blog for a short time, then  move to its proper chronological position.
When: May 25, 2010 • Where: Dakota • Who: Tia Fuller, saxophones; Shamie Royston, piano; Luques Curtis, bass; Rudy Royston, drums

I saw saxophonist Tia Fuller when she came to the Dakota last July. I thought she was good, although she didn't knock my socks off. (Her drummer, Kim Thompson, did.) Fuller returned to the Dakota in May of this year and I missed both nights, something I now regret. Here's what my friend Raymond Hayes wrote about her in an email to me the day after he saw her. 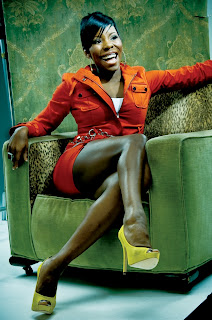 A quick review of last night's concert. Tia Fuller was great, way better then the first time she came. This time she had her own band. She had her sister [Shamie Royston] on piano, her sister's husband [Rudy Royston] on drums, and a very good bass player [Luques Curtis] who was not related. She did mostly original material with a few standards thrown in for good measure. She is a very powerful player. Definitely influenced by Coltrane (who isn't), she has obviously studied very hard. And her hard work is paying off. This band was as tight as any jazz band I have seen at the Dakota. But her personality is very bright and bubbly, more what you would expect from a singer then from a hard-core jazz player. She definitely loves playing. It was really interesting seeing this bright and bubbly person talk about her family and playing music. Then, all of a sudden, throw down as hard as Joshua Redman. Her sister is great piano player who can play both fast and hard plus light and lyrical. Her sister's husband, the drummer is one of the hottest guys out there, they said he just came off the road with Eddie Palmieri and has played with Branford Marsalis, Joe Lovano, Charles Lloyd and many others. Same is true with the bass player ,who just joined the band last week. Only two things wrong. (1) I only went to one night and I should have seen both. (2) There were almost no people there. Why is it that some of the best jazz you hear comes when there is almost nobody around? I downloaded her new record [Decisive Steps, Mack Avenue, 2010]. It's very good. If she ever comes back you have to go. Ray