This is a sort-of review not because it was a sort-of concert, but a concert at an event and venue that are challenging for performers with any degree of subtlety: the Minnesota Orchestra's annual Symphony Ball at the Depot in Minneapolis.

The Depot is cavernous, a former train shed with high peaked ceilings. The Ball is the Orchestra's annual fundraiser. Ladies wear gowns, men wear tuxes, and people are there to see, be seen, socialize, and give money. (Live auction items included a trip to Hawaii valued at $50,000.) Co-hosts Sarah Hicks and Irvin Mayfield were charming, HH looked dreamy in his tux, I had the privilege of meeting maestro Osmo Vanska, meteorologist Paul Douglas walked by, and I saw at least one pair of Christian Louboutin shoes. But I digress from the music. See how easy it is? 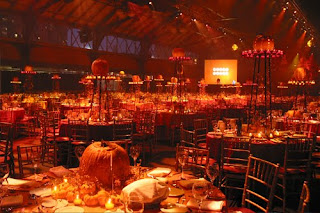 The Depot. Not our event, but you get the idea.

Gardot and her band were the featured entertainment. I had never seen her live but had heard her debut CD, Worrisome Heart, and like it very much. She's her own singer with her own voice and style, but if you've never heard her before, it might be helpful (sort of) to think Madeleine Peyroux meets Patricia Barber meets Nellie McKay.

Her personal story is compelling: a devastating accident in 2003 left her in chronic pain, hypersensitive to light (her dark glasses are not an affectation), and needing to walk with a cane. Just 25, she seems older, but who wouldn't. She credits music and music therapy with saving her brain.

She has a distinctive and beautiful voice--sultry, bluesy, with a feathery vibrato--and enormous personal style. Her sound, her way of singing, her demeanor, and her name seem French; she was born in New Jersey, but the French love her. For the Symphony Ball, she wore a very little black dress and very high heels.

She brought a killer band. The saxophonist and drummer were new to me, but not her bassist, Charnett Moffett. Any band with Charnett Moffett in it is worth sitting quietly and listening to, which many people didn't do. Had Frank Sinatra come back from the dead or Barbra Streisand appeared on stage, I'm not sure the results would have been much different.

Despite the talking and laughing and milling around and the fact that many people left early (this was, it must be said, mostly an older crowd, the event started early and ran long, and once the wine was poured, there were no bars), Gardot prevailed. The people who stayed gradually moved closer to the stage as spaces opened up at tables. Toward the end, mostly serious listeners were left, and we were richly rewarded.

Gardot sang and played piano and guitar. Her singing is warm and intimate, her banter relaxed and engaging. She sings with real emotion--not just the words, but the feelings within and behind them, whether serious or playful, hopeful or consumed with longing or nostalgia or regret. She performed many of her own songs--I wasn't taking notes, and now that I've been listening again to Worrisome Heart and (for the first time)  My One and Only Thrill (her latest, a giveaway at last night's event), I can't recall which songs I heard last night and which I heard this morning. But I do remember a delicious "Summertime" and her closer, "Caravan." I hope to hear her again before too long, in a club setting or a small hall or even a festival where people come for the music.

I wish I I could have been in two places at once last night. In another part of the Depot, Maud Hixson and her  new band, French 75, were performing at Crash the Ball, an event for young professionals. Wish I could have seen them, too.
Posted by Pamela Espeland at 6:27 PM