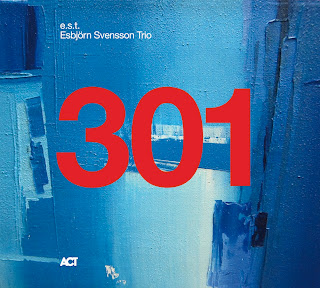 It can seem a bit ghoulish to release an artist's music posthumously. You wonder--how do we know he or she wanted it out there? Does it have something new and important to say, or are the survivors simply profiting or unable to let go and move on?

And yet, if we love the artist, we long for more, especially after a sudden, tragic, much-too-soon death.

When jazz pianist and composer Esbjörn Svensson died in a scuba-diving accident on June 14, 2008, he was only 44. His eponymous band e.s.t. (Esbjörn Svensson Trio) had achieved international stardom and was still on the rise. It was the first European group to be featured on DownBeat's cover (in 2006, the same year e.s.t. won the European Jazz Award and the BBC Jazz Award). Although much of the US had not yet hipped to e.s.t.'s exciting, genre-defying brand of jazz and the group played to ridiculously small audiences here (at the Dakota in Minneapolis, for example, back when the Dakota would risk such a thing), Svensson, drummer Magnus Öström, and bassist Dan Berglund filled stadiums elsewhere in the world, as if they were a rock band. (For their big gigs, they added light shows and fog machines.)


I first saw them at the Dakota in 2004, and after that, I never missed them. Their fourth and final performance in Minneapolis was April 19, 2007. I contacted their publicist later that year about a possible tour behind their CD "Live in Hamburg," and she said they might come to Minneapolis again in June 2008.

Earlier in 2007, the group had used some off time in Sydney to record new songs and material at the city's Studio 301. Soon after, Svensson edited much of the material, some nine hours' worth, down to two CDs. The plan was to release either a double album or two consecutive albums.

The first, "Leucocyte," was mixed, mastered, and ready to go when Svensson died. It was the trio's first CD of free improvisation--jamming without a net. I like it very much, and I wrote a bit about it in 2009. I'm listening to it now, for the nth time. How solemn and beautiful "Still" is, and how trippy. How ass-kicking Öström's drums are throughout. How intriguing, Sci-Fi spacey, and magnificent the four-part "Leucocyte" is, even with the seemingly endless minute of John Cage-like silence that divides the first movement, "Ab Initio" (from the beginning) from the third, eerily titled "Ad Mortem"--until death. (The fourth movement is "Ad Infinitum"--to infinity.)

The new CD is named "301," after the Sydney studio. Berglund and Öström did the editing in late 2011. Neither is guilty of not moving on. Berglund has a new band, Tonbruket, made of friends from before e.s.t.; they have released two CDs so far, "Tonbruket" and "Dig It to the End." In 2011, Öström released a solo CD, "Thread of Life," that includes a Svensson tribute by Berglund and Pat Metheny.

To finalize "301," Berglund and Öström worked with e.s.t.'s sound engineer Ake Linton, the man behind the mixing desk for over 500 live shows, overlayer of the effects and distortions that helped to create the signature e.s.t. sound. Linton had been in the Syndey studio when the original recordings were made, and he traveled to Bohus Sound Recording in Gothenburg, Sweden, for the mixing and mastering.

The new album is available in the US on May 8, on the ACT label. Seven tracks and just over an hour of new, never-before-heard music by e.s.t. Not ghoulish; a gift.

Email ThisBlogThis!Share to TwitterShare to FacebookShare to Pinterest
Labels: E.S.T.