Catching up with Nancy Harms 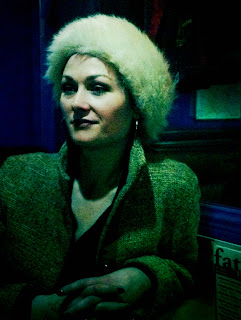 When vocalist Nancy Harms moved from Minneapolis to New York in 2010, she left us with her remarkable debut CD, "In the Indigo," and a collective longing for more of her unique sound and way with time. Hearing Nancy sing is like watching a flying trapeze artist sail from bar to bar, doing aerial tricks along the way. She has returned since for the "Blue" concert at the Capri Theatre in north Minneapolis; for a series of studio recordings for Arne Fogel's radio program "Minnesota Voices: Certain Standards"; for a night at the Artists' Quarter in St. Paul with guitarist Zacc Harris, bassist James Buckley, and drummer Jay Epstein. But we don't see and hear nearly enough of her.

She's a complicated girl, full of seeming contradictions: so cool, yet her songs ache with emotion; so relaxed and calm, yet her mind must be moving at stratospheric speeds to improvise and play with time as she does. Wistful, yet wise. An old soul in a young and classy package. She's originally from Clara City, pop. 1,297, but don't think you'll put anything past her. She's also a straight-shooter, and someone you instinctively trust. Not long after meeting her, I was handing her the keys to our house.


Since heading east to the Big Apple (and beyond; she's performed at a jazz festival in Norway and toured Italy), Nancy has been up to plenty. She's sung at Zeb's, Zinc, and the Bar Next Door, Small's and Birdland, Kitano and Dizzy's. Wycliffe Gordon heard her jam at Small's, and before long she was recording with him; you can hear her on two tracks on Gordon's "Hello Pops!," his tribute to Louis Armstrong: "I've Got the World on a String" and "Dream a Little Dream" (the first time I've heard Nancy scat). She's been noticed by some big guns; Gary Giddins and Will Friedwald have both written admiringly about her. Even before she left the Midwest, NPR featured her "Bye Bye Blackbird" in its weekly "Take Five" jazz sampler.

Nancy comes home to Minnesota in mid-May with one of her new projects, Double Bass Double Voice. It's as simple (and as complex) as it sounds: one big acoustic bass, played by Steve Whipple, and two voices, Nancy's and that of Emily Braden, with whom she is amazingly well matched. They'll play a concert at the Barn Theater in Willmar on May 12 (tickets at KWLM radio or Cashwise Foods), then travel to Minneapolis for a May 13 show at the Dakota. Double Bass Double Voice is stripped-down and fascinating. Two tracks have been recorded so far, a swinging "Just Squeeze Me," complete with sweet harmonies, snapping fingers, and whistling, and a chilling take on the traditional song "Death Came A-Knockin'." As the voices intertwine, the bass knocks hard.

Nancy has also been working with wunderkind pianist/composer/arranger Jeremy Siskind. She sang some of his pieces at the AQ in September and has recorded several tracks for his new CD, "Finger-Songwriter," due out in mid-May from Brooklyn Jazz Underground Records. Including the joyous "Theme for a Sunrise" and the smoky, sultry "What Is That Feeling."

If you want to catch up with Nancy post-"In the Indigo" and pre-her Minnesota dates, these links are a good start.

Official music video of "Bye Bye Blackbird" (from "In the Indigo").

Songs recorded by Nancy for "Minnesota's Voices: Certain Standards," with Tanner Taylor on piano:
"The Autumn Leaves"
"The Days of Wine and Roses"
"A Kiss to Build a Dream On"
"How High the Moon"
"If I Were a Bell"
"Beautiful Love"

Photo of Nancy Harms relaxing at Fat Cat in NYC (February 2011) by yrs truly
Posted by Pamela Espeland at 5:05 PM