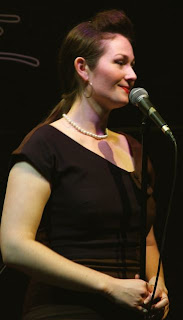 Tanner's trio and Dave Karr warm up with "Brer Rabbit" and another upbeat tune. Nancy comes through the curtain looking fabulous, from her upswept bangs to the tips of her leopard-print peeptoe shoes. She swings "Bye Bye Blackbird" and "Our Love Is Here to Stay." Then "Some Day My Prince Will Come." 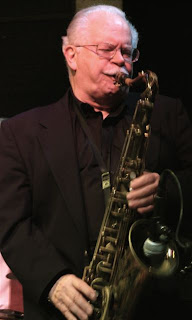 Let's digress. "Prince" was written for the 1937 Disney animated film Snow White and the Seven Dwarfs. Dave Brubeck recorded the first jazz version in 1957 on Dave Digs Disney. Ever since, it has been a jazz standard, played and recorded often; probably the best-known recordings are those by Oscar Peterson, Chet Baker, and Miles Davis (Miles is the one I hear in my head). Usually, unless I'm mistaken, it's performed/recorded as an instrumental, not surprising given the lyrics:

Some day when spring is here
We'll find our love anew
And the birds will sing
And wedding bells will ring
Some day when my dreams come true.

Pure corn, but Nancy pulls it off. She's wistful, hopeful, utterly believable. No small accomplishment when one sings this particular tune.

"How High the Moon," "Pennies from Heaven." A break between sets. Nancy stops by to say hi. She says she's nervous about performing at the Dakota on a Friday night, which usually attracts a crowd. Her nervousness doesn't show. She has a big house tonight and a typically chatty weekend audience, but she owns the stage and plenty of people are paying attention. 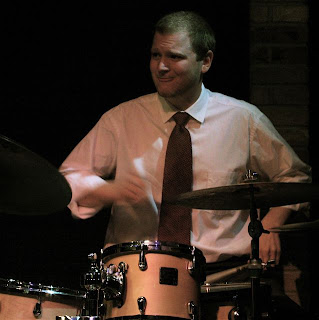 Second set: a lovely "Summertime" with Dave on flute. "All of Me." "Softly As in the Morning Sunlight." "Fly Me to the Moon." All standards, no originals; she's writing lyrics but not yet composing music. She doesn't scat. She's a former schoolteacher trying to make it as a jazz singer. I like her voice very much, her tone and how she forms words, and her strong sense of timing; she doesn't sound like anyone else I have heard. I think someday she'll sing and no one will talk--everyone will listen.

Photos by John Whiting, who figured we had enough pictures of Tanner and didn't take any this time, even though Tanner was wearing a nice suit instead of a polo shirt.
Posted by Pamela Espeland at 11:00 PM