Fat Kid Wednesdays at the Clown 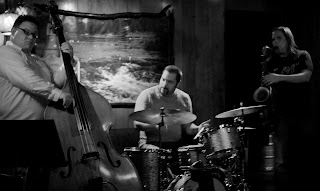 Located downstairs from the Turf Club on University Avenue, the Clown Lounge is a center for improvisational music. During an interview earlier this year, Kelly Rossum said, "The Clown is a big deal. Out of all the clubs in the Twin Cities, it's the most consistently high quality music, week by week, month by month, year by year." 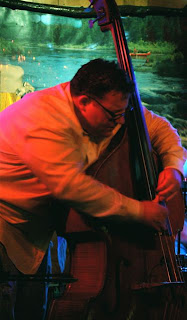 It's a pretty full house for Labor Day, mostly young white guys who are there to listen, including other musicians: Chris Morrissey, Bryan Nichols. Linz smacks his bass and pulls at the strings, Lewis paces (I wonder what he does on a shallow stage? Fall off?), JT rolls a ball around on top of his big floor tom. Lewis plays the same note over and over again, supporting Linz's solo; JT looks like he's trying to dig a hole in his snare with his sticks, or start a fire. At one point he seems to be playing goat toenails in a handkerchief. 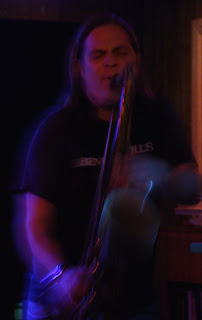 Let me not give the impression the Kids are playing around. This is wholly engaging music, sometimes teetering on an edge but more often melodic and beautiful. During "Dewey's Tune," JT gives us a gorgeous drum solo. Lewis's tone is tender and sweet. Linz makes his instrument sing.

Words come into my head as I listen, and images, and this phrase, which repeats like a chorus: Jazz is contagious. Where did that come from? I don't know but it's the truth. 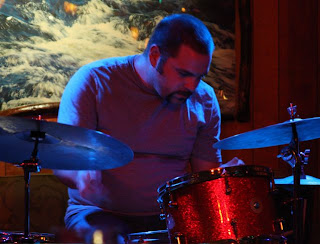 When we last saw Fat Kid at Cafe Maude, they played a tune by the Shaggs. I'm hoping they will again and they do: "That Little Sports Car."

Note to self: Get to the Clown more often.

Photos by John Whiting.
Posted by Pamela Espeland at 5:29 PM