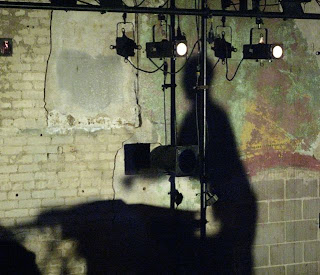 The Southern Theater is one of my favorite venues for music and dance. With its exposed brick walls, hints of past windows and doorways, an archway that could have come from some ancient building, and a black metal grid that floats overhead, housing wires and sprinklers and holding lights and speakers, it is simply a great space. The recent ousting of its 30+ year artistic director (who was placed on "indefinite leave") has caused a ruckus in the arts community but so far the shows are going on. 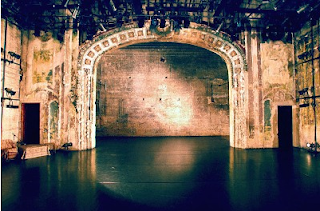 Born in NYC and still mostly based there (the Southern was the first venue outside of NYC to present an installment of the series), Wordless Music is (says its mission statement) "devoted to the idea that the sound worlds of classical and contemporary instrumental music—in genres such as indie rock and electronica—share more in common than conventional thinking might suggest." Series founder Ronen Givony is here to tell us more and introduce tonight's performers. "It seems deeply unnatural to separate and compartmentalize music into little boxes," he says, then explains that a Wordless Music event is "like an iPod set to shuffle, which makes no judgments or distinctions." I like that if I don't think too deeply about it. Someone makes a judgment about what to put on that iPod in the first place. 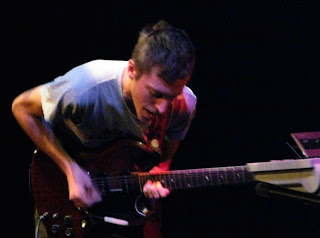 I've seen local wunderkind Andrew Broder before, at the Cedar with George Cartwright and Gloryland PonyCat. He's on first, alone with his guitar, some pedals, and a thicket of wires. He lays down a dense loop, then another on top of that, and another, like a rug merchant stacking Persian carpets. The sound echoes and bounces off the Southern's bare walls. The music grows in thickness, complexity and level, rising in pitch until it suddenly reminds me of the voice of the monolith in 2001: A Space Odyssey. I can't help it, it does, and I mean no offense. Then it's wind, then a train, then it shifts down and begins again. Trancey, but with an edge of anxiety. Now it's like floating in clouds that suddenly turn black and roiling. Now it's the buzzing of a million pissed-off bees. Huge crescendo, abrupt silence. I like it a lot. 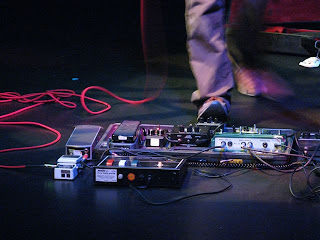 Owen Weaver, who recorded Isolation with the Pan-Metropolitan Trio but wasn't present at the CD release (he had already relocated to Austin, Texas to go to school) plays three wonderful pieces: "Opening" by Philip Glass (which sounds very Bach-ish to me) on the marimba; "Rebonds b" by Iannis Xenakis on big drums, congas, snares, and blocks; and "In a Landscape" by John Cage, which I thought was a complete improvisation until I read the program. Dreamy marimba, with thundering percussion sandwiched in between. Very nice. 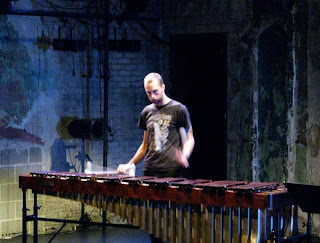 Cepia (Huntley Miller) closes the program (there's no intermission; one plays, walks off, and the next walks on; they don't play together). I'm psyched to see him after reading in the Strib that he studied with Anthony Cox. But I don't get his music. Not that I expect musicians to tap dance and twirl scarves, but watching someone sit at a laptop (even a Mac laptop) is not especially interesting. Even if you can see him, which you can't because the stage is so dark. Videos by Randy Kramer are projected on a screen at the back of the stage, but I don't find them especially compelling. The music seems like the same phrase repeated over and over. I doze off. HH tells me I'm not alone. 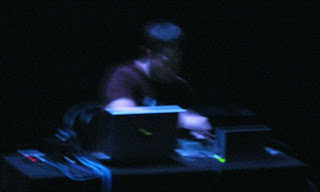 But I'm more than satisfied with two out of three, so thumbs up to Wordless Music and the Southern.

We drive home with the windows open and the radio tuned to KBEM and Kevin Barnes's "Bluesville" show. He plays a tune by Catfish Keith with lyrics that make me laugh:

Baby, I'm a fine artiste
And baby I deserve to be kissed.

Later I learn they're from a song by R. Crumb and the Cheap Suit Serenaders called "Fine Artiste Blues." Not wordless, but music. It's going on my iPod.

Photos were taken with permission, in case anyone is wondering. The one of the Southern's interior was borrowed from the Wordless Music site, and I'm guessing they got it from the Southern.
Posted by Pamela Espeland at 11:55 PM