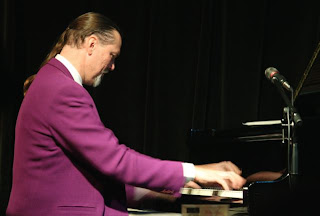 The Republican National Convention is in town and St. Paul is a police state, but it's our anniversary and we want to see Jon Weber, who's here for one night only. So we drive by the barriers and the fences topped with barbed wire, find parking in the Macy's ramp, walk into the Hamm Building past armed security guards, and head downstairs to the AQ to find that most people have stayed away.

A bad thing for them and for the musicians, who deserve a bigger audience; a good thing for us, because we are about to be treated to a private concert of music, facts, history, tales, days and dates, mathematical equations, and interesting asides. A salon with Jon Weber, pianist, brainiac, raconteur.

"Penthouse Serenade." "Very Early" by Bill Evans. Weber leans back from his bench and considers the possibility of a CD made entirely of Thelonious Monk ballads. "When you slow Monk down," he says, "it's almost normal speed....'Darn That Dream' is a Monk tune if you speed it up." He demonstrates. It is. Then he riffs on the strange but true fact that 4/4, 6/6, 8/8, 10/10, and 12/12 all fall on the same day of the week no matter what year it is. Who knew? He plays a Henry Mancini tune. He tells a Henry Mancini tale from when he (Weber) was 25 and gigging at the Hyatt in Milwaukee when Mancini came in and young Jon played the composer's music for him.

"Secret Love," a Sammy Fain tune from 1954, written for the movie Calamity Jane. The bridge between choruses is very long. It's the Lake Pontchartrain Causeway. "Lulu's Back in Town," "When I Fall in Love" (with Kenny on brushes, caressing the drums). Around midnight, a few people wander in, dressed up, no doubt from the Convention; they have just stumbled into some of the best music they may ever hear.

Weber loves to play and he doesn't want to quit. Fine with me; a friend has treated us to a bottle of champagne for our anniversary (thanks, Steve!) and we're enjoying everything about this evening. Appropriately (or ironically), "I Didn't Know What Time It Was," a Rodgers and Hart tune (from a musical called Too Many Girls, Weber explains, which is where Desi met Lucy.) Finally, "Jitterbug Waltz" with touches of "Take Five" and the "Mission, Impossible" theme.

Still smiling, we climb the stairs into the night and walk down the pedestrian mall toward the parking lot. A minivan pulls up to the light, stops, and two police officers in riot gear get out. They slam their doors and glare at us before turning away. Not as bad as being maced or pepper sprayed or handcuffed, but chilling. Usually when we come out of the AQ late we worry about too-aggressive panhandlers, not police.