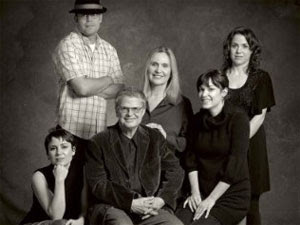 While researching Charlie Haden for MinnPost, I learned he was about to release a country music CD, and that he had sung (and yodeled) bluegrass music as a child on his family's radio program on KMA in Shenandoah, Iowa. Rambling Boy came out on Tuesday (Sept. 23). "Great CD," he said during our interview. "Couldn't be better. My daughters, my son, my wife, Vince Gill, Elvis Costello, Roseanne Cash, Ricky Skaggs, Jerry Douglas--all these great musicians. Pictures of my family."

The CD has its own Web site, with a video about the making of the album. Check it out.

Liane Hansen interviewed Haden and his family (including son-in-law Jack Black) for NPR's Weekend Edition on Sunday, Sept. 21. It's a really nice piece and worth a listen.

The NPR site led me to an earlier interview from the Tavis Smiley Show (Nov. 11, 2004) during which Haden talked with Roy Hurst about the creation of free jazz--and why he plays with his eyes closed: "The obvious answer to that is 'to concentrate.' But I tell this funny little story: The first night we opened at the Five Spot, I was unpacking my base, and Ornette was getting his horn out, we're getting ready to play, and I looked across at where the bar was, and standing at the bar were Wilbur Ware, Charlie Mingus, Ray Brown, Percy Heath, Paul Chambers--every great bass player in New York City was looking right in my face, and I said, from that time on, I close my eyes."

Photo by Jim McGuire.
Posted by Pamela Espeland at 9:07 AM