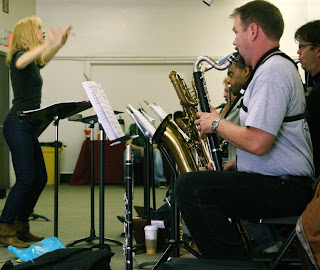 We began day 2 of the Monterey Jazz Festival at Maria Schneider's rehearsal for the world premiere performance of her commissioned work, "Willow Lake." We heard a complete run-through of this beautiful piece, which reminded me of birds and cattails and sun sparkling on blue water.

When we go to live music, we usually see the performance part, the go-for-broke, in-the-moment event. We rarely see the behind-the-scenes crafting and shaping and working-out part, the take-it-again-from-bar-317 part. 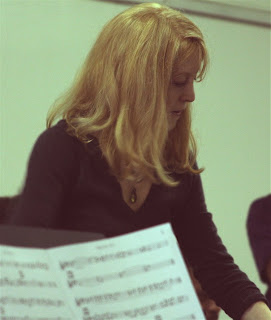 We were told the order could change. It didn't. That was the concert we heard later that night, and at the end, the crowd gave Maria and her orchestra a standing ovation. 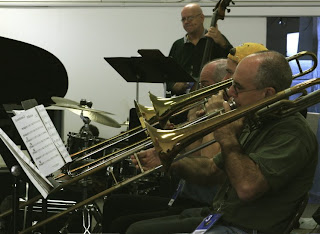 Also seen/heard on day 2: DownBeat Magazine's Blindfold Test with Cassandra Wilson, Maceo Parker and the Monterey Jazz Festival Next Generation Orchestra, the Terence Blanchard Quintet (very briefly, but with a big surprise), Antonio Sanchez & Migration (David Sanchez, Miguel Zenon, Scott Colley), the Matt Wilson-Bill Frisell Duo, and, to end and neatly frame the day, the last few minutes of the Maria Schneider Orchestra's late-night performance at Dizzy's Den, where Kurt Elling and Laurence Hobgood were standing outside the door, deep in conversation with two other people. I wanted to interrupt but exercised self-restraint.

Photos by John Whiting
Posted by Pamela Espeland at 1:34 AM