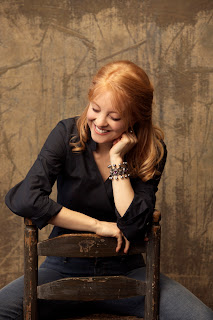 On Saturday, September 20, jazz composer and conductor Maria Schneider will lead her orchestra in the world premiere performance of "Willow Lake," a work commissioned by the Monterey Jazz Festival. It's her second MJF commission and, like her first, "Scenes from Childhood" (1995), inspired by memories of Windom, the small Minnesota town where she grew up. She still calls Windom "the best town in the world." I spoke with her last week by phone for this week's MinnPost column.

More from our interview:

"Whenever you have a premiere, you're working out new things you've never done before. Some people say 'We should record the premiere.' No! It always takes the band a while to find the piece. Premieres always stress me out. We haven't found our way.... 'Cerulean Skies' [which won a Grammy in 2007] now plays itself. At the premiere, I was thinking it was horrible. As we played it more and more, we found our way....

"When you write orchestral music, you have to write in every little nuance of every little note. With my band, I don't even put dynamics in. I want it to be different every time on different nights. So much more malleability. But then it's hard because you're writing something around all these unfinished elements."

In October, Schneider comes to St. Paul for another world premiere, this time of her first work for chamber orchestra (the SPCO). It's a cycle of songs based on poems by the Brazilian Carlos Drummond de Andrade, translated by former U.S. poet laureate Mark Strand (who will be in the audience and, I hope, will also do a reading while he's here, maybe at the Loft?). The great soprano Dawn Upshaw will sing. So, how did Schneider end up with two premieres of original commissioned work within about a month of each other?

"It wasn't intentional. It's been very difficult. The Monterey thing snuck up on me, quite honestly.... I've been touring a lot, five trips to Europe, one with my band.... It's busy but it's good. When you're writing, you become such a hermit, and when you're on the road you become so externalized. You get exhausted in a different way. It's hard going back and forth, back and forth. You have to be an extrovert, then all of a sudden you have to become an introvert....

"Writing music isn't about writing music. It's about expressing life through music. If you get so busy doing music music music, you don't fill your life with experience to create more music. One thing I'm doing coming up is putting more space in my life. More space for reading, going to museums, hearing concerts. Life always has opportunities it throws at you, but if you're so busy you don't have space in your life, they pass by..... I want to live life more as an improvisation."

Photo by Jimmy and Dena Katz.
Posted by Pamela Espeland at 10:18 AM