To paraphrase Robert Burns: The best-laid plans of mice and men often go awry.
Our plane is scheduled to leave San Francisco at 3:55 p.m. Our rental car is due back at the airport at 2 p.m. We leave the hotel at 11 a.m. and turn onto Highway 1 heading north. It's about a 2-hour drive and we have 3 hours, after which we'll have 2 hours at the airport for lunch and leg-stretching before assuming the fetal position in the cramped 757.
At around 10:30 a.m., a tractor trailer heading north on Highway 1 miles ahead of us blows a tire, hits a guardrail, and bursts into flames. 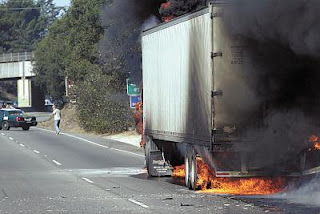 See the man at the side of the road. That's the driver, running.
Kaboom! 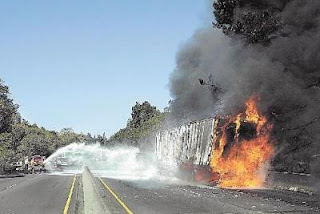 Trees and vegetation catch fire. Area residents are notified that they might have to evacuate. Traffic is s-l-o-w-l-y rerouted off the scenic highway to the surface streets of Aptos.
We spend the next 2 hours like this. 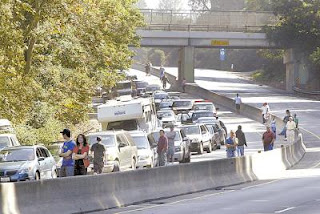 We arrive at the airport after 3, quickly return the car, and take the tram to the main terminal. By now it's 3:30. I'm certain we won't make our 3:55 flight. HH remains calm.

We make our flight. By some strange miracle, we seem to be the only people in the airport. No one in line at the Northwest counter, no one in line at the security checkpoint. We leave our luggage at the counter and get through security without being wanded or patted down. At the door of the plane, there's a brief verbal tussle about what to do with our small rollaboards. Of course there's no room in the overhead bins. There is never room in the overhead bins for the last people on the plane! One flight attend insists they must be checked. Another, a voice of reason, says "Oh, just stick them under the seats in front of you. Now go!" The door slams behind us. Later, when the beverage cart rolls our way, we buy the last remaining snack pack: three tiny triangles of bread, three cubes of cheese, six apple slices, eight grapes, seven dollars.