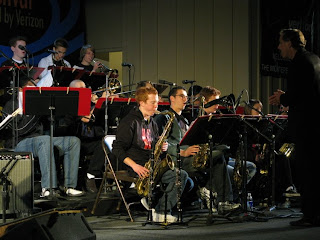 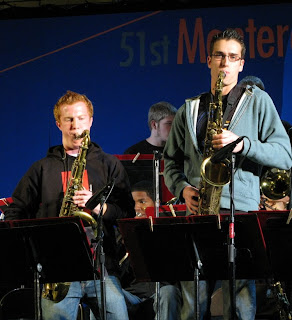 Led by Mr. Paul Contos, the NGJO played for an invitation-only crowd at the Thursday Night Pre-Festival BBQ. During the festival, they will perform with Maceo Parker and with Artist-in-Residence Christian McBride. Earlier this year, they played the North Sea Jazz Festival in Rotterdam. 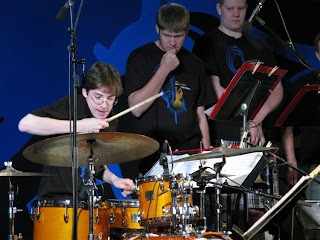 We heard them as we walked toward the fairgrounds, jazz pouring into the night. Although (as Contos later told the crowd) they had been rehearsing for hours and had played another gig earlier today, they sounded great together and the solos were fine. I especially enjoyed the final tune, an arrangement of "Skylark" by Bob Brookmeyer that made me hear that old familiar melody as if it were brand new. Nice solo from alto saxophonist Hailey Niswanger, one of two young women in the band.
Posted by Pamela Espeland at 11:20 PM