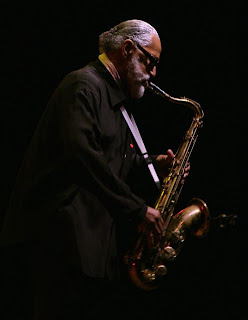 Saturday, September 6, 2008 • Today is the 78th birthday of the great saxophone master Sonny Rollins. We saw him at the Monterey Jazz Festival last fall, and before then on Halloween night 2006 at the Ted Mann concert hall, when he came as part of the Northrop Jazz Season. He played a version of "St. Thomas" I can still hear in my head.

Recently I watched the Robert Mugge documentary "Sonny Rollins: Saxophone Colossus." Filmed in 1986, it shows Sonny in concert at a rock quarry near his home in upstate New York (during which he jumps from the stage, breaks a heel, and keeps playing), being interviewed in NYC with his wife, Lucille, at his side, and in Japan, performing an original composition with orchestra. At one point he tells Mugge, "The saxophone is almost closer to me than Lucille. She knows this already so she's not jealous.... The saxophone is very close to you. It's a very delicate instrument. The slightest thing can change the nuance you put into it. It can drive you crazy because even if you know what you want to play, sometimes it doesn't come out." Hard to imagine Sonny's saxophone not doing exactly what he wants it to do.

Posted by Pamela Espeland at 5:16 PM