He played instruments made of ice; chimes, a xylophone, drums, and horns. She vocalized, mostly wordlessly, her voice rising high and sweet, looped and layered and reverbed. Both wore hooded parkas indoors; he wore gloves or mittens. Many of the more than 200 people who came to hear them kept their coats on.

Norwegian musician Terje Isungset and singer Mari Kvien Brunvoll may never play a music festival in Havana or Trinidad, but Minnesota was a good place for them to come; it’s winter here, and Bill Covitz, the ice engineer who carves and crafts Isungset’s instruments (a new set before each concert), was able to find the ice he needed in one of our local lakes. Lake ice sounds better than machine ice, and some lake ice sounds better than other lake ice. “There is only some lakes that have sound,” Isungset told NPR earlier this week, “and even if you find the lake there might be just a few pieces that will have a good sound.” All of the instruments are temporary. They melt, crack, and change shape during the performance. Pieces break off and fall to the ground. Even when played outdoors in the cold, the ice horns are changed by the warmth of Isungset’s breath. Trained as a jazz musician, Isungset can improvise, which is probably Thing One when ice is your medium.

Is it music? Yes. Maybe not for everyone; a few people at the Cedar left after half an hour. (Perhaps because the concert started late; setting up instruments hell-bent on returning to a liquid state is a challenge.) It's ethereal and otherworldly music, arctic and hypnotic. Most is percussive, ice hit by ice sticks or mallets. Careful miking catches and amplifies what begin as delicate sounds. Icebergs boom while calving, but small blocks being struck don’t have a lot of volume. It must be fun to be Asle Karstad, Isungset’s sound man.

The horns are especially haunting. Isungset played three at the Cedar: large and slightly curved, smaller and more tightly curved, and straight, with a wide flared bell at the end. They sounded like alpenhorns, like whales singing, like ships at sea, like the wind. The “iceophone” (ice xylophone) sounded like a kalimba/mbira (African thumb piano) on steroids. The ice chimes clinked and clanked. The small drum made a small, hollow sound, and the large one on the floor made a big sound, like a bass drum in a drum kit, like a giant’s heartbeat. Sometimes a struck piece of ice rang with a crystalline hum that hung in the air and slowly faded. Isungset is especially fond of ice that has this kind of voice, like a living thing. He also crunched ice underfoot and scraped it, rhythmically and repetitively.

Isungset and Brunvoll performed for more than an hour, maybe longer, until they had to quit. The large blocks were dripping onto the stage and the horns had become unplayable. Afterward, Isungset handed instruments and bits of instruments to audience members. “Thanks to nature for giving us these instruments,” he said earlier. And, “It’s quite amazing that water could sound like this. You can drink this instrument.” Music sends its own powerful messages, but Isungset’s music goes deeper, telling us how precious water is, how useful and essential, how long it has been on our planet. Coincidentally (or not), the Minneapolis StarTribune published an article that day on how Minnesota is draining its water supplies.

Isungset has been making his Ice Music for 13 years, but this is the first time he has brought it to the US. He played two sold-out concerts at the Kennedy Center in Washington, DC on Friday, Feb. 23, then came here. Those appear to be his only US dates. Thanks to the Cedar for giving us the chance to hear this unique and remarkable artist.

•  “Turning a Glacier Into a Tuba: Ice Music from Norway” (audio; heard on All Things Considered)
•  “Iceconcert live on TV – 2012. Terje Isungset & Mari Kvien Brunvoll” (video; similar to what we saw at the Cedar)
•  “‘Ice Music,’ made from frozen instruments” (video from the Minneapolis StarTribune)
•  "From an ice block, musician carves his marimba" (article with video from the St. Paul Pioneer Press)
•  “For Norway’s Terje Isungset, music is carved from ice” (photos from Minnesota Public Radio of the instruments being made for the Cedar concert)
•  "Watching Terje Isungset examine ice is mystifying. Like a Nordic Stradivarius, he lifts individual pieces to his ear, taps them lightly, and listens for something none of the rest of us can hear." (an essay by Cedar intern Zach McCormick, with a video by Michael Rossetto)

All photos by John Whiting. 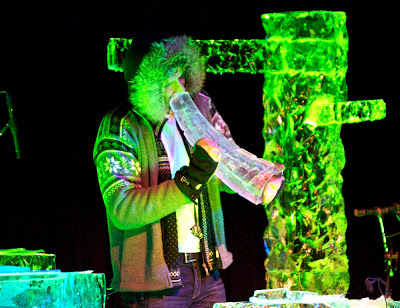 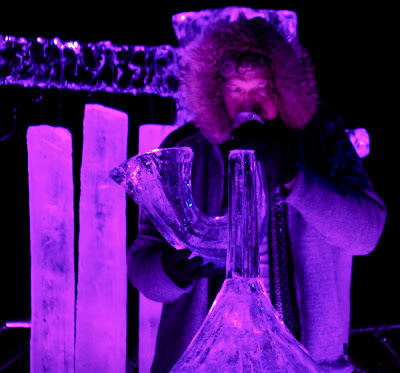 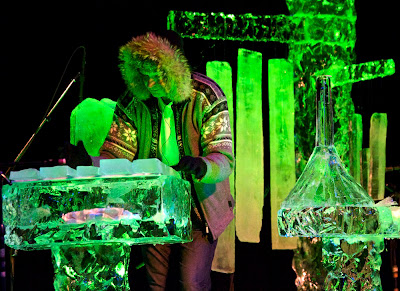 Posted by Pamela Espeland at 1:03 PM