When Bob Dylan won the Nobel Prize for Literature, former U.S. poet laureate Billy Collins was in Minnesota, making two appearances for Pen Pals, the Friends of the Hennepin County Library’s author series. It seemed only natural that someone would ask Collins his opinion on that, and on Friday morning, Oct. 14, at the Hopkins Center for the Arts, someone did.

“I was fine with it,” Collins told the sold-out crowd who had come to hear him read and speak. “The Nobel Prize committee often comes up with obscure writers, and you have to play catch-up [to learn who they are]. But you don’t have to google Bob Dylan.

“Some people are saying [Dylan’s lyrics] are not quite literature. Students are asking, ‘What about Jim Morrison? He’s a poet, isn’t he?’

“I’ve read [Dylan’s] lyrics on paper, and his liner notes. And I think his lyrics do hold up on paper.

“I thought it was an inspired, bold choice, and I’m all for it.”

Collins is a rock star himself, in the literary world, poetry subcategory. He has a new book, “The Rain in Portugal,” which made its debut today at #15 on the New York Times bestseller list for hardcover fiction (because the Times doesn’t have a bestseller list for poetry), which put Collins in a good mood. Or maybe he was already in a good mood. He seemed like a happy man, someone you’d like to know, genial, glad to be a poet, and a successful one at that. In a little over an hour, leaving time at the end for a Q-and-A, he read 26 poems, interspersing them with often humorous anecdotes.

Collins’ poems are plainspoken, laced with humor, yet profound. They usually start with something simple, even mundane, then rise up and expand in meaning and importance, sometimes to the point of majesty.

Two poems he read on Friday morning, “1960” and “Nightclub,” made jazz references. According to his Facebook page (which is updated by his management and publisher, not Collins himself, but with his approval), he recently read a poem aloud to Wynton Marsalis. The poem, “Man Listening to Disc,” mentions Sonny Rollins, bassist Tommy Potter, drummer Arthur Taylor and Thelonious Monk, and the track “The Way You Look Tonight,” so Collins was probably writing about the Concord recording “Thelonious Monk/Sonny Rollins.”

Because Collins is a rock-star poet, here’s his set list from Friday – the titles of the poems he read. Many are from “The Rain in Portugal,” but not all. Some, like “The Lanyard” and “Forgetfulness,” are old favorites people in the audience already knew.

“You, Reader”
“1960”
“Lucky Cat”
“Only Child”
“Predator”
“In Praise of Ignorance”
“Sixteen Years Old, I Help Bring in the Hay on My Uncle John’s Farms with Two French-Canadian Workers”
“December 1”
“Down on the Farm”
(a poem about staying awake at night wondering which member of a couple would die first; sorry, didn’t catch this title)
“Cheerios”
“To My Favorite Seventeen-Year-Old High School Girl”
“Royal Aristocrat”
“The Death of the Hat”
“The Lanyard”
“The Golden Years”
“Oh My God!”
“Divorce”
“Flock”
“No Time”
“Elk River Falls”
“Dharma”
“Forgetfulness”
“Nostalgia”
“On Turning Ten”
“Nightclub”

He introduced each poem, or followed it up, with a brief comment, story or explanation. A selection:

“Our cat shows no sign of going anywhere except from room to room. … She looks like she has something to say, but she just forgot it. She’ll stare at you, and you’re sure she’s about to speak, then she’ll blink and you’ll know she just lost it.”
“Poetry began as a series of memory tools, mnemonic devices – the impulse to write, to capture a moment in amber.”
“A friend used to stay awake at night wondering which Everly Brother would die first. He liked them both equally.”
“Poems can arise from the meanest of circumstances.” (An example: his poem “Cheerios,” which he wrote after learning that he and the cereal are the same age.)
“Here’s how poetry works: You start with something simple and see how it goes. An object gathers significance.” (From his introduction to “Lanyard,” which was sparked by seeing the word “Lanyard” in the dictionary. He noted that “no cookie nibbled by a French poet could send one so quickly into the past” as that word did for him, which yanked him back in time to summer camp, when he wove a lanyard for his mother. “I could have made her a potholder, but I probably wouldn’t have written a poem about it.”)
“Here’s a sonnet, just because I can do it.”
“A nutshell is another name for the grave. … If you think writing a funny poem about your dead parents is easy, give it a whirl.”
“Majoring in English is pretty much majoring in death. Most poems are about mortality. That’s what gets poets up in the morning.”

Collins’ responses to audience questions during the Q-and-A gave insight into his process, how he writes poetry and what others who want to write poetry might try. A selection:

-- On the state of mind that produces poems: “Vigilance. … I’ve never sat down to write. I’ve never had any work habits. … Poetry is an exploitative, opportunistic view of human experience. … Being able to spot something you think might have poetic possibilities, then trying it out later.” He always has a notebook, and many of his poems begin with something he’s written there.
On poetry and emotion: “Young people write at night. That’s not a good idea. It intensifies your feeling of being the only person in the world. … The worst thing is to be emotional in a poem. You have to play it cool, to write cold. You want your reader to be emotional. … You’re trying to get a stranger to be interested in you and your life. Readers don’t come to poetry because they care about you; they come because they care about poetry. You have to convince them that you love poetry as much as they do. That links you together.”
On science fiction: “All science fiction is about two things: either we go there, or they come here.”
On learning from an audience member that all the letters for the word “typewriter” are found on the top row of the keyboard: “I didn’t know that. Thank you, Mrs. Qwerty.”

When asked, “How does it feel to stand in front of hundreds of women who are profoundly in love with you?” Collins said, “It feels good. And that’s a good note to end on.”

On the way out, everyone received a copy of “The Rain in Portugal.” 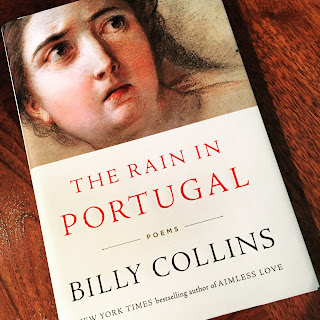 Posted by Pamela Espeland at 4:25 PM