On seeing Denzel Washington in “Fences” at the Cort Theatre on May 16, 2010

Denzel Washington’s “Fences,” his big-screen adaptation of August Wilson’s play, opens Christmas Day and is already being hailed as a strong Oscar contender.

Washington has also made a deal with HBO to executive produce adaptations of the other nine plays in Wilson’s “Century Cycle,” also known as his “Pittsburgh Cycle” (because all 10 plays are set in Pittsburgh).

“Fences” premiered on Broadway at the 46th Street Theatre on March 26, 1987, ran for 525 performances and won four Tonys. The first Broadway revival opened on April 26, 2010, for a limited 13-week run and won three Tonys: for Best Revival of a Play, Best Actress in a Play (Viola Davis), and Best Actor in a Play (Washington), his first and so far only Tony.

The cast of the movie is almost identical to the cast of the Broadway revival, with Washington, Davis, Stephen McKinley Henderson, Russell Hornsby and Mykelti Williamson all reprising their roles as Troy Maxson, Rose Maxson, Jim Bono, Lyons and Gabriel. On Broadway, Eden Duncan-Smith and SaCha Stewart-Coleman alternated in the role of Raynell, and Chris Chalk played Cory. In the film, Saniyya Sidney is Raynell and Jovan Adepo is Cory.

We saw the 3 p.m. matinee on May 16. Our seats were high in the Cort’s balcony, which has such a steep rake that everyone has an unobstructed view.

Seated around us were several ladies who had come into New York by bus from Atlantic City. They had enjoyed long lunches with cocktails and wine, which they were chatting about. They were excited and happy.

When the house lights dimmed and Henderson and Washington walked on stage – they have the first lines – the ladies screamed. Even from the balcony, Washington was a powerful presence, sending out hot Denzel waves. He may be one of the few actors who doesn’t appear smaller in person than he does on screen. He definitely has charisma. I almost screamed myself. I’m not lying; it was thrilling.

He ignored the noise and said his lines, and continued to say his lines. Throughout the play, some members of the crowd gave feedback. They cheered and gasped, yelled “You go, girl!” when Rose (Davis) stood up to Troy (Washington) and “No, you didn’t!” when someone said something outrageous. Halfway through the first act, a woman seated in our row, a few seats away, started snoring.

During intermission, the snoring was a topic of conversation. “Did you hear that?” “Somebody was snoring.” “Who was snoring?” Several people turned to look at us. I looked back. “Oh, no,” I said. “Honest, it wasn’t me. Or him, either.” By now, the snorer was awake, sitting up and acting all innocent. We didn't blow her cover.

We had seen “Fences” before, in a 2008 Penumbra Theatre production directed by Lou Bellamy, with this stellar cast: James. A. Williams, Marion McClinton, Elayn J. Taylor, Kevin D. West, James Craven and James T. Alred, with Marianne McGee and Mahogany Ellis alternating as Raynell. So we knew the play. Parts of the Penumbra show were still in my head, and I thought – this New York play is awfully good, but so was ours back in St. Paul. Washington’s sparkling star-power aura was something, but it wasn’t everything. I’d still rather see an August Wilson play at Penumbra.

On the way out, we ran into Matthew Fox, another heartthrob and the star of “Lost,” which was in its last season (the final episode would air a week later, on May 23). John shook his hand and said “Thanks for doing what you do.” Fox said, “Thanks, man.”

We joined the crowd at the stage door. Washington never came out (or left earlier), but Williamson, Davis and Chalk did. I had brought my copy of “Fences” from the Century Cycle box set published by Theatre Communications Group (an investment I made years back, so glad), and Davis and Williamson signed it. 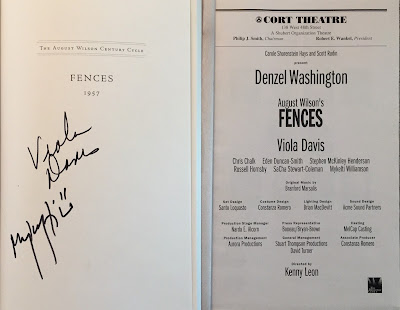 Posted by Pamela Espeland at 12:41 PM