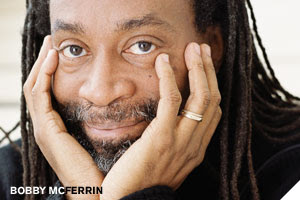 Nine men in somber suits with the voices of angels; one man in jeans and a T-shirt, graying dreads knotted behind his head, his slight body holding a chorus, an orchestra, and the entire cast of The Wizard of Oz.

Playing to a capacity house (Orchestra Hall holds more than 2,000 people, and the concert was sold out—Tickets Wanted pleas were posted on Craigslist), Cantus, a full-time professional vocal ensemble (one of the few in the world), opened with a program of folk songs, pop songs, gospel, and McFerrin’s arrangement of the Twenty-third Psalm, dedicated to his mother, paraphrased, and with the pronouns changed: “The Lord is my shepherd, I have all that I need. She makes me to lie down in green meadows…She restores my soul.” Beautiful. Cantus is now on my list of go-see-agains, and if tenor Gary Ruschman wants to come to my house before then and sing a few songs I’m good with that.

Then Cantus took chairs on either side of the stage and McFerrin came out like a child sauntering onto his own personal playground, which every stage in the world must be to him. He sat on a chair and performed several songs solo—if by solo you mean using his body and mouth as percussion instruments, singing multiple parts (melody, harmony, rhythm) at once, leaping (and landing) octaves and intervals, and roaming everywhere across his limitless vocal range. If you have never heard him, go to this page on his website and do what it says.

Audience participation is a big part of McFerrin’s shows. He had us singing along to silly stuff (the “Beverly Hillbillies” and “Peter Gunn” TV themes), serious stuff (Bach-Gounod’s “Ave Maria,” which a surprising number of people in the audience knew, over McFerrin’s own vocalese of Bach’s first Two-Part Invention), and improvised-in-the-moment stuff (he taught us to sing a particular note when he jumped up and down, then jumped sideways to lead us along the musical scale—think Tom Hanks in the movie Big—and before long we were singing a tune). He brought Judi Donaghy, a member of his interactive choral group Voicestra, up from the audience for a lovely version of “I Can See Clearly Now.” (See the P.S. below.) Then he asked Cantus to join him and played them like the instruments they are.

McFerrin didn’t sing his mega-hit “Don’t Worry, Be Happy,” but he did sing Charles Chaplin’s “Smile.” He ended with his famous condensed version of The Wizard of Oz, which starts as a straightforward (for Bobby) version of “Over the Rainbow” (with audience participation), then segues into a 100-yard dash down the Yellow Brick Road through the whole movie, with McFerrin playing all the characters and sound effects. Watch a version here from the late 1980s. It’s hilarious, it’s virtuosic, it’s otherworldly.

They left the stage, we wanted McFerrin back, and he obliged—with the Mickey Mouse Club’s “Now It’s Time to Say Goodbye.” A perfect ending to a perfect night. Kudos to Orchestra Hall’s visionary Lilly Schwartz for pulling it together.

P.S. (added 2/5/09): Earlier that same day, McFerrin performed at McNally Smith College of Music. As he would at Orchestra Hall later that night, he called Judi Donaghy (the school's vocal chair) on stage. Here's something similar, not identical, to what we saw, within hours of when we saw it. You can also read the McNally Smith blog entry on McFerrin's visit and watch a student perform with him. (Thanks to Sydney Michaels for sending the link to the YouTube video.)

Posted by Pamela Espeland at 10:09 AM