Debbie Duncan at the Dakota 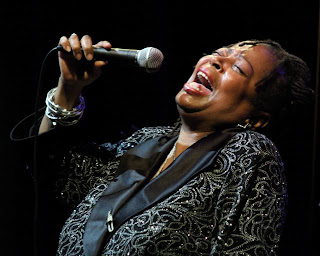 We see Debbie Duncan at Barbara Morrison's show on Monday, then return to the Dakota on Thursday for Debbie and her quartet. We arrive in time for "Over Dere," a song for which I usually have little patience but I like pretty much whatever Debbie sings.

She moves effortlessly from song to song, style to style. And she knows how to get the best out of whatever band she plays with. There are moments tonight of pure magic when the energy can't get any higher or the music any better--during "After All" ("Mornin' Mr. Radio, mornin' little Cheerios, mornin' sister Oriole"), and during Debbie's own arrangement of "Afro Blue," accompanied only by Boudreaux and Washington. Voice-and-percussion now seems like the perfect way to do this song. 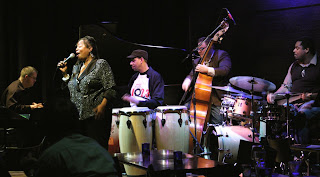 She sings "Love, Look Away" from Flower Drum Song and a swinging version of Cole Porter's "It's All Right with Me," ornamented at the end with scatting. And "Misty," a tune we've all heard a zillion times but not like this: She sings around the melody, not on it. Occasionally she lands on a melody note, but only briefly, like she's touching ground between flights.

In homage to jazz legend James Moody, who comes to the Dakota on Monday and Tuesday (Jan. 12-13), she performs "Moody's Mood for Love," which inspires an introduction. "Personally," she says, "I think this is one of the sexiest songs ever written, yet it leaves something to the imagination. It's one of those songs you put on when you're trying to get from point A to point Z in the course of an evening." Her between-songs patter is warm and engaging.

"Teach Me Tonight" is soulful and sincere, playful and bluesy; she ends with "Teach me! I'm willing!" and sends us out into the night. She's back at the Dakota on the 20th in "4 Women for Obama" with Yolande Bruce, Ginger Commodore, and Tonia Hughes-Kendrick, then again on February 7 with Adi Yeshaya. Debbie, do your many fans a solid and update your schedule on your Web site so we know where else to find you.

Photos by John Whiting.
Posted by Pamela Espeland at 7:19 AM