Deborah Voigt: All the right notes 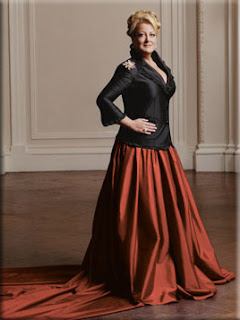 Confession: I don’t get the art songs, or recital songs, or whatever they call the music performed by classical/operatic/dramatic sopranos/mezzos/tenors/basses in programs like the one we heard last night at the Ordway. I’m not saying I don’t like them; I just don’t get them. It seems they’re either too short or too long, with too much drama, and I can’t make sense of the structure. I’ll take jazz almost any way it’s served, but give me a song with a verse and a chorus and a bridge, please.

That being said, I enjoyed every moment of Deborah Voigt. At 8:02, the doors opened, out she strode, and off she took on “The year’s at the spring,” an energetic setting of a sunny poem by Robert Browning (the one that ends “God’s in His heaven—All’s right with the world!”). She looked spectacular. This is the soprano who was fired in 2004 by the Royal Opera House for being too large for a costume she was supposed to wear in the opera Ariadne auf Naxos. Following gastric bypass surgery, she is considerably slimmer but hardly a stick. (And she treats the story with humor and wit; see her video “The Return of the Little Black Dress.”) At the Ordway, she wore beefsteak-tomato-red satin, lace, and sequins. Her matching shoes had beaded tassels. Just what a diva should wear.

Three Browning songs were followed by four Verdi songs, each with lots of rolled Rs. Then five by Richard Strauss. Reading the texts and translations, minding the printed instructions “Please wait for the end of the song to turn the page” (when everyone turned the page, Voigt mimed being fanned by a breeze), I fantasized someday writing a poem that would be set to music and sung by a famous soprano. Maybe I could start by selecting some of the lyrics from tonight’s program….

The wind has dropped, and the sky’s deranged.
Do not approach the urn that holds my ashes!
Have mercy, oh woman of grief. Pour me some wine!
The weather is bad. The alders and the willows weep.
Girls with streaming hair and bare breasts cry “Adonis! Adonis!”
A groan of the dead arises. The crows fly over the moors, grimly.

Intermission, then part two (the part where Voigt wore sequins). Four songs by Respighi (actually three; she skipped one), and four by living American composer (and painter) Ben Moore, a name new to me. His texts are poems by Elizabeth Bishop, James Joyce, and Robert Herrick (“To the Virgins, to make much of Time”). I liked them very much. The last six songs were by Leonard Bernstein, starting with the nonsense lyrics of “Piccola Serenata” and ending with “Somewhere” from West Side Story.

Throughout, Voigt was utterly charming. She made occasional comments to the audience, mugged a bit, and mentioned more than once that her mother was in the house. Her voice was sumptuous, resonant on the lower notes, wide-open on the highs. Her diction was crisp and clear. World-famous though she is, she seemed accessible and warm, and the entire evening had an intimate feel. It was everything I like about a Schubert Club concert.

As always at a Schubert Club event with a piano, there was a third person on stage for much of the night: page-turner (and composer) David Evan Thomas, seated in a chair to the left of Zeger. Read more about him here. (Be sure to see the delightful rumination from AfroJet at the top of the page.) I wonder: Do page-turners ever get sleepy?