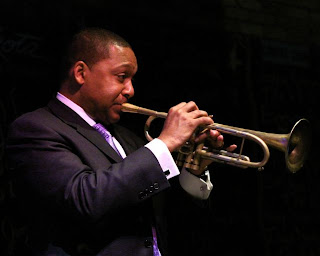 When: Saturday, March 7 • Where: Dakota

The Dakota jazz club and Orchestra Hall, home of the Minnesota Orchestra, have been in close geographical proximity since the Dakota moved from St. Paul to Minneapolis in late 2003, but they never had a relationship until Lilly Schwartz became the Orchestra’s director of pops and special projects. Ever since, artists performing at Orchestra Hall have made their way to the Dakota after shows to dine in the club’s restaurant and sometimes perform on its stage. So when the Jazz at Lincoln Center Orchestra came to town, it was a given that at least some of the band members would stop by on Friday or Saturday, maybe both. And it was hoped that some of them would jam with the excellent trio hired for the late-night shows: pianist Bryan Nichols, bassist Adam Linz, drummer J.T. Bates.

We weren’t able to go to the late-night on Friday but heard later that trumpeter Sean Jones and other JLCO members performed—and that a local musician had engaged Jones in a cutting contest. As they say, poor bastard, and I don’t mean Jones.

We were there on Saturday and it was one for the jazz history books. We knew when Wynton Marsalis came into the club—everyone knew—but didn’t expect him to play. Then he stepped on stage and joined Nichols, Linz, and Bates for the first tune. When he stepped down, we thought that was all we would hear from him. More JLCO members played—bassist Carlos Henriquez, drummer Ali Jackson, trumpeters Freddie Hendrix and Ryan Kisor. Then the trio took a break, after which Marsalis returned with his own trio: pianist Dan Nimmer, Henriquez, Jackson. 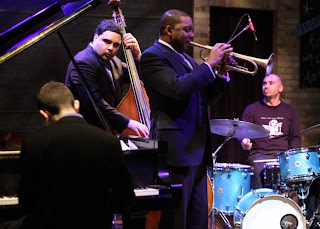 For the next 20 minutes or so, the Dakota was the Village Vanguard, Blues Alley, and the House of Tribes. By now it was SRO—word had gotten out—and it was thrilling to be there. The last time Marsalis played a small club in the Twin Cities was October 2003, at the now-defunct Brilliant Corners in St. Paul. Tickets were $45. The Dakota charges $5 for its late-night sets. People who walked in off the street on Saturday out of curiosity, or because they had heard the Dakota had a late-night scene and wanted to check it out, got more than a bargain. They got a once-in-a-lifetime experience.

When the quartet finished, the jam didn’t end. Saxophonist Michael Lewis, home on break from his tour with Andrew Bird, came through the curtain and played a tune; so did saxophonist Chris Thomson. Drummer Kevin Washington took over for J.T. toward the end and filled the air with thunder. Marsalis stood by the side of the stage, nodding and smiling. 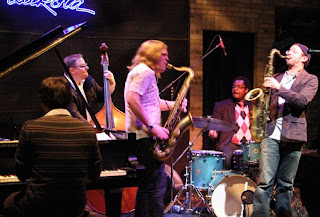 P.S. I asked Jeremy Walker, former proprietor of Brilliant Corners, what Marsalis and his group played during their set. His answer: "I believe it is a suite of tunes called 'The Magic Hour.' I know he played some of the material at Brilliant Corners way back when. If I remember right, it is a suite about getting the kids to bed so you can have quiet time with the special person in your life."
Posted by Pamela Espeland at 6:00 PM