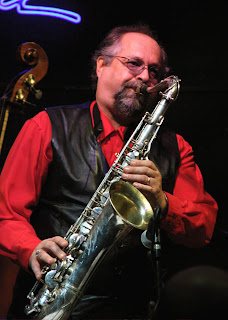 The trouble with most supergroups is they’re too much to take in. Consider the SFJAZZ Collective. I would have been happy to see any one of these seven great musicians in a small-group setting (or, in the case of the splendid pianist Renee Rosnes, solo…or, because a girl can dream, piano-four-hands with her husband, Bill Charlap). But last night all seven were on the Dakota stage at once, making it difficult to decide (except during solos) where to point my eyes and ears.

I mean, Joe Lovano! He rarely touches down in Minneapolis and I have only seen him live once, at an IAJE in NYC. And Miguel Zenon! I’ve seen him several times but it’s never enough. What a powerhouse. Passionate and fascinating. Eric Harland—monster/charmer. Matt Penman. Robin Eubanks. Dave Douglas. At least I didn’t have to torture myself over when to focus on Stefon Harris; he’s on hiatus from the band for a year. 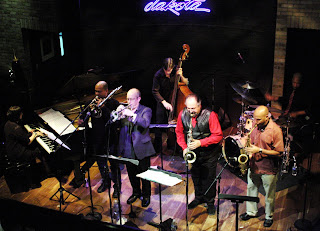 Unlike supergroups with dueling egos and meltdowns, SFJC is a real ensemble. They rehearse extensively before touring and it shows. They’re tight. They all arrange, they all compose. Each year, they focus on a different composer; this year it’s McCoy Tyner. (Past years: Ornette Coleman, John Coltrane, Herbie Hancock, Thelonious Monk.) So their program includes their own arrangements of works by Tyner and new works of their own. 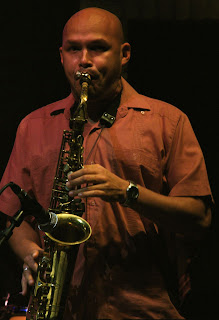 We were at the second set, and this is what we heard:

1. Tyner’s “Peresina,” arranged by Douglas. Out of the gate, an amazing solo by Rosnes. (Pianist Mary Louise Knutson had a clear view of the keyboard and Rosnes’s hands throughout the set—how perfect was that?)
2. Penman’s “Yup, We Did.” Written as a playful response to Eubanks’s “Yes, We Can,” which came later.
3. Tyner’s “Aisha,” arranged by Joe Lovano. A showcase for Lovano’s gorgeous tenor saxophone.
4. Rosnes’s “Migrations.” A warm and sunny piece with a terrific solo by Douglas. Did I hear him quote “There Will Never Be Another You”? A big song for Chet Baker.
5. Eubanks’s “Yes, We Can (A Victory Dance).” Eubanks explained that he was in Bratislava, Slovakia on the night Obama won the election. He wanted to write a celebratory tune. When they weren't playing their instruments, the other band members clapped a pattern of twos and threes.
6. Harland’s “ECollective.” Harland purred and growled his introduction, telling us this piece is based on a tihi, a rhythmic cadence used by Indian drummers. Harland has played a lot with Indian tablaist Ustad Zakir Hussain so he has learned from the best. The band members began by singing the rhythm, as Hussain does when he plays: ticka ticka ticka. Then all rhythmic hell broke loose.
7. Tyner’s “Four by Five,” arranged by Zenon. The blazing, generous encore. 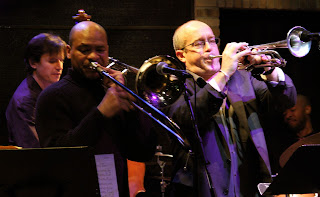 Tonight’s performance capped an incredible run of very big nights for music in Minneapolis/St. Paul. Last week: Joshua Redman’s trio, Esperanza Spalding, Frank Kimbrough, Kenny Werner, the Lincoln Center Jazz Orchestra, a surprise performance by Wynton Marsalis and his quartet on the Dakota stage following their final LCJO show at Orchestra Hall. (Kimbrough was the only one I didn’t see, simply because I couldn’t be in two places at once). Who knew things could get so exciting in flyover land?

Photos by John Whiting.
Posted by Pamela Espeland at 2:36 PM