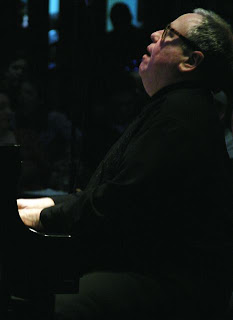 The Dakota on a Saturday night can be a tough room for musicians, depending on what their expectations are. It's a big date night when people come to see and be seen, to hang out and sip martinis and be cool. Sometimes the crowd noise buries the music or turns it into wallpaper.

Not tonight. The curtain is open, the house is full, and people are here to listen to the Kenny Werner Trio’s poetry and elegance and sublimeness. Even if that’s not what they came for, they succumb.

Werner’s presence is a lucky break for us. He was already scheduled to be in Minnesota, performing at the Head of the Lakes Jazz Festival in Duluth on Thursday and Friday; apparently his Saturday was free and the Dakota booked him. Area vocalist Debbie Duncan, originally on the calendar for Friday and Saturday, will join the trio for part of the evening. Duncan and Werner met for the first time today. It’s jazz.

“With a Song in My Heart”: Big, lovely chords. Then a piece Werner introduces as “written for us by J.S. Bach; we’re honored.” Bach would have been honored by Werner’s respectful, inventive treatment of his “Sicilienne,” beginning with a lengthy improvised piano solo into which Roeder and Barshay delicately step. (I’m listening to the recording on Werner’s Form and Fantasy, Vol. 1 as I write this.) Something by Herbie Hancock. Werner’s “Peace.” 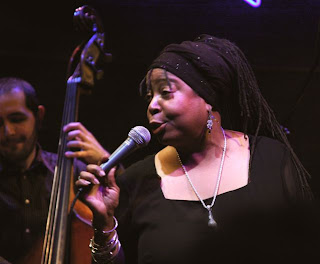 Duncan enters for Gershwin’s “Plenty of Nothin’” and Ellington’s “Sophisticated Lady.” I have heard Werner several times but never before with a singer (although he often plays with Betty Buckley, it hasn’t happened here). He and Duncan are a fine match and both seem happy with the results. We are.

Werner’s version of Brubeck’s “In Your Own Sweet Way” closes the first set. The second is just as luscious: Coltrane’s “26-2” (Werner notes that they changed it to “26-2-5”), a multilayered “Greensleeves,” the bright, sunny Bulgarian folk song “Nardis” (also on Form and Fantasy), “All Right with Me.”

Duncan returns with Monk’s “’Round Midnight” and sings the version she prefers, with lyrics by Jon Hendricks. She introduces it by explaining that “Hendricks’ words have a more positive swing to them” than the more commonly performed lyrics by Bernie Hanighen and Clarence Williams. Later, I compare.

Hanighen/Williams:
It begins to tell
’round midnight, midnight
I do pretty well
till after sundown
Suppertime I’m feelin’ sad
but it really gets bad
’round midnight.

Hendricks:
Tears you’ve shed today
will pause, waiting until tomorrow
Dreams of what could be
come close to me timidly
There’s a brand new day
in sight at the time
’round about midnight.

It’s a powerful and expressive performance during which Werner smiles broadly.

I have said almost nothing about Werner's new trio. (Previously I have heard him with Johannes Weidenmueller and Ari Hoenig, and with Toots Thielemans.) When Werner plays, my focus is almost entirely on him. He comes from such a deep place and brings so much with him--beauty, profoundness, wisdom, emotion, awareness, understanding--that it's all I can do to take in as much as I can before it melts into the air. His playing is food for spirit and soul. I think the audience knows that, even the fine young dandies with their dressed-up dates, and that's why they listen so hard. Bassist Jorge Roeder and percussionist Richie Barshay are both very young (still in their 20s), though also very experienced: Barshay has been a member of the Herbie Hancock Quartet, Peruvian-born Roeder has performed and recorded with Hancock, Steve Turre, Roy Haynes and others. Next time I'll pay more attention to them.

Photos by John Whiting.
Posted by Pamela Espeland at 2:00 PM