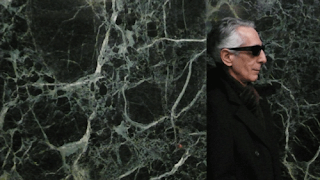 I'm trying to remember the one and only time I saw guitarist Pat Martino play. Friends insist it was at the new Dakota (the club moved from its original home in St. Paul to downtown Minneapolis in late 2003) but I know that's not right--I clearly recall seeing Martino on the old Dakota stage. That's because I have a memory (sort of), and for a while, Martino didn't.

The great jazz guitarist--a technical virtuoso and a legend in the 1960s and 1970s--suffered a life-threatening brain condition (tumor? aneurysm? combination?) in the 1980s. Last-minute surgery (he had been given two hours to live) saved his life but left him with total amnesia. His parents were strangers, his guitar was a stranger, music was a stranger.

The fascinating film Martino Unstrung (2008), which screened last night as part of jazz radio station KBEM's inventive REEL Jazz Film Series, tells the story of Martino's fall through misdiagnosed mental illness, shock therapy, and near death to blank slate, and his astonishing rise to a level of proficiency and musicality that many believe exceeds where he was before the surgery. We see him trying to name words that start with the letter A (it's a struggle) and titles of Beatles songs (not one). We learn how his parents took him again and again through family photo albums, how his father played his old recordings endlessly. How he knew Joe Pesci the actor but not Joe Pesci his friend. How he was nobody and came back to a new life, a new wife, and a career. Maybe a new self as well. How can we tell?

I saw Pat Martino play at the old Dakota in March 2002. I confess, I didn't remember the month and year; I found a tour schedule on All About Jazz. I'm listening now to the CD that was new at the time: Live at Yoshi's with Joey De Francesco and Billy Hart. "All Blues." "Blue and Green." The poignantly named, defiantly upbeat "Recollection."

In a recent (August 2008) Jazz Times article about Martino, he makes several provocative observations. A sampling:

• "I don't think about the future. I think about now, and I have faith in what comes next."
• "I'm never not working. To me, work is play.... I can't relate to vacations, because I have nothing to vacate."
• "I'm less occupied with thoughts about the future, which doesn't exist, or memories that are weighty."
• "Recovery is, in my opinion, a loss.... To recover something is to return to the way it was."

More about the film, including the trailer. The cast includes Pete Townshend, Carlos Santana, John Patitucci, Eric Alexander, and Les Paul, inventor of the electric guitar.
Pat Martino's Web site. Note his ferocious touring schedule. When he tours with a quartet, Rick Germanson is his pianist. A favorite of mine, Rick returns to the Artists' Quarter in St. Paul later this month (Friday, April 24-Saturday, April 25, with trumpeter Jim Rotondi).
The complete Jazz Times article referenced above.
Photo: A still from Martino Unstrung.
Posted by Pamela Espeland at 12:27 PM